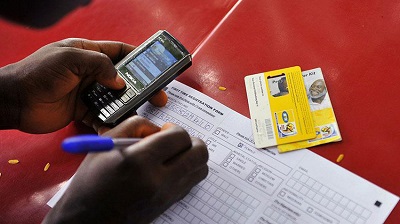 The punitive measures against mobile network subscribers who are yet to re-register their SIM cards are beginning to bite hard as they are only able to receive calls.

Twice this week, owners of yet to be re-registered SIM cards were not able to make calls or conduct any other transaction with their SIM cards as the National Communications Authority (NCA) punitive measure took effect.

Unfortunately, some users who have successfully re-registered their cards, have also been caught in this punitive measure, leaving many people frustrated. This has resulted in long queues building up at various telecommunication centres as customers turn up to get their issues resolved.

Last Sunday, the NCA maintained in a statement that: “A set of punitive measures designed to culminate the year-long nationwide SIM re-registration exercise will kick in from Monday, September 5, 2022.

“From Monday, September 5, 2022, subscribers who have not started their re-registration will have all outgoing calls re-routed to an interactive voice recording (IVR) for a SIM registration sensitisation message to be played before all calls are connected.

“Subscribers with uncompleted registration, that is those who linked their Ghana cards to their SIM cards via *404# but have not proceeded to have their biodata captured will also face similar disruption in service from Wednesday, September 7, 2022.”

It also said the punitive measures for data services will however, kick in from September 12.

The release stated that outgoing calls and data services would be blocked for these affected subscribers for 48 hours once a week once the punitive measures kicked in for the month of September, 2022.

“Mobile Network Operators shall divide the unregistered SIMs into five batches for the purpose of implementing this punitive measure.”

At some centres the Daily Graphic visited, it observed that the queues, agitations, frustrations and chaotic scenes were building up like it was during the early days of the exercise.

The situation was the same at the MTN, Vodafone and AirtelTigo service centres the Daily Graphic visited within Accra.

It observed that while some customers had come over to confront the service providers for blocking their networks in spite of having gone through the process of re-registration, others were there to complete the process.

Some customers told the Daily Graphic that they received messages from their service providers that their SIM cards had been blocked ‘partially’ for two days due to their failure to re-register them using the Ghana Card.

“I have tried all means to get my card without success, so why do I get punished for something that is beyond my control? A customer who was clearly agitated, asked.
Another said: “I have fully gone through the process and this was undertaken by a team from MTN that came to our church for that exercise. I received feedback that I had successfully completed the re-registration exercise, yet now, I cannot make calls, another said.

“This is very unfair and a clear indication that the issues of the SIM card re-registration are more complex than what the NCA and the Minister of Communications is telling us,” yet another victim said.

“We all understand that we have to re-register our SIM cards, but here is the case that the NIA was not able to issue the cards and instead of dealing with that, we are being punished for it.

“This is unfair and unnecessary tension the NCA and the Ministry of Communications want to create. They have to verify that the card issuance process is efficient before they take these punitive measures,” one of the students, almost in tears said.

Last Thursday, things got to a head when an angry taxi driver reacted to his SIM card being blocked by invoking curses on a service provider. A video of the incident has since gone viral.

The taxi driver moved into one of the telecommunication companies in Accra to complain about his predicament.

It is unclear what ensued in the office, but when he came out of the office, he went straight to his car, stripped naked and crossed the busy road, holding a bottle of what looked like alcohol.

On reaching the road’s median, he raised the bottle, chanted incantations in anger, poured out the drink and crossed back to the office’s car park where his vehicle was and dressed up.

Officials of the service providers who spoke to the Daily Graphic said the sanctions had taken effect, but unfortunately since it was a regulatory direction, there was very little they could do.

The officials also admitted that it was possible that those who might have gone through the process also suffered the disruptions because of network issues.

“It is a technology process so once the network has a challenge it affects its smooth operations. Our attention has been drawn to the fact that despite completing the process, some people have fallen victim and we will be investigating and resolve that,” they indicated.