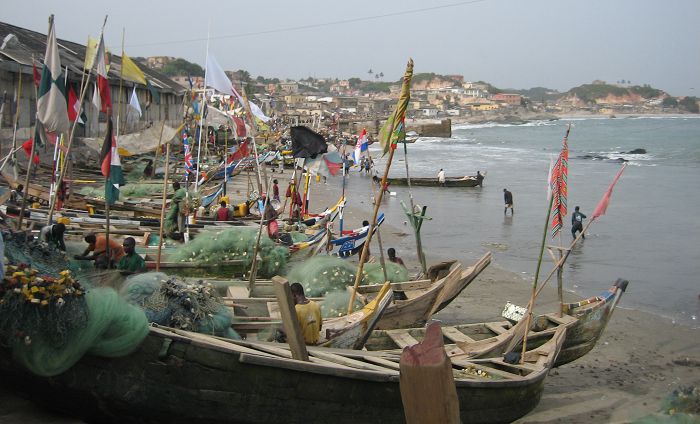 The exploitation and hoarding in the sale of premix fuel along the coastal communities is worsening the plight of fishermen, nullifying the effects of subsidies on the work of the fishermen.

A gallon of premix is supposed to be sold at GH¢10.40, but it is currently being sold to fishermen at about GH¢50 at the shores.

If the automation is rolled out, fishermen will get premix at authorised filling stations just like how petrol is sold.

This will remove the many middlemen who buy the fuel at the shores and resell to the ordinary fishermen.

Interviews conducted along some of the fishing communities in Cape Coast indicated that the fishermen felt enraged by the exploitation known in local parlance as “kalabule” and want the efforts at automation expedited.

The automation policy is massively supported by some fishermen in the Central Region.

A fisherman, Kofi Bondzi, said “kalabule” in the sale of premix was worrying.

He said when the premix arrived at the shores, the “connection men” took over the fuel and sold at exorbitant prices to them.

“This is not the government’s making. Our own people are hurting us and selling at cut-throat prices. Let us all go and buy from the fuel stations,” he stated.

Another fisherman, Kwesi Anamoah, said the high cost of premix had made life unbearable for fishermen.

“Our canoes are anchored because we don’t have premix fuel to move; how can this be?” he queried.

Yet another fisherman, Kojo Abban, said the premix had been hijacked by people who were not fishermen. He said that was worrying and had greatly affected their work.

“If we buy it at such high cost, how do we go to sea and make profit?” he asked.

Others indicated that only about one-third of the fuel brought to the premix station at the landing beaches were sold to real fishermen.

While the Premix Secretariat and the Ministry of Fisheries and Aquaculture Development (MoFAD) are collaborating to clamp down on premix hoarding syndicates at the landing beaches, they indicate that the automation of the sale of premix will solve the problem permanently.

The Administrator at the Premix Secretariat, Nana Abrokwa Asare, in an interview with the Daily Graphic said the hoarding of the premix for later resale to fishermen at exorbitant prices was worsening the plight of fishermen and by extension the fishing communities.

He explained that while the government intended to subsidise the premix to ease the burden on fishermen, the subsidies had become an incentive for diverting and hoarding the fuel for later sale, thus nullifying the effects of the subsidies on the work and lives of the fishermen.

Nana Asare said so far, three dispensers had been set up to pilot the automation of the sale at Elmina, Tema and Yeji.

He noted that that would also improve efficiency in the sale of premix and improve safety at the premix sale points.

The Minister of Fisheries and Aquaculture Development, Hawa Koomson, sternly reiterated that the ministry would not spare any person found to be involved in the premix “kalabule”.

She warned recently at Otuam in the Central Region that the ministry would deal mercilessly with illegal exploitative premix sellers and charged all district assemblies to join in the fight.

The two were arrested at 9 p.m. at the Komenda Basic School allegedly selling a barrel of premix which was expected to sell at GH¢700 for GH¢24,000.

Mr Appiah said the assembly, together with the police command would leave no stone unturned in arresting the unscrupulous persons involved in the premix “kalabule” deals.

Premix is critical for the work of artisanal fishermen. Without it, many of them cannot go to sea.

The livelihoods and economic stay of many coastal communities depend on fishermen going to sea.

If the sale of a critical input such as premix is exploited by people who usually are not even fishermen themselves, then the fishing communities are certain to be left poorer.

It is the expectation of fishermen that the automation would rid the system of the stress in accessing premix and remove all exploitative elements from the value chain.