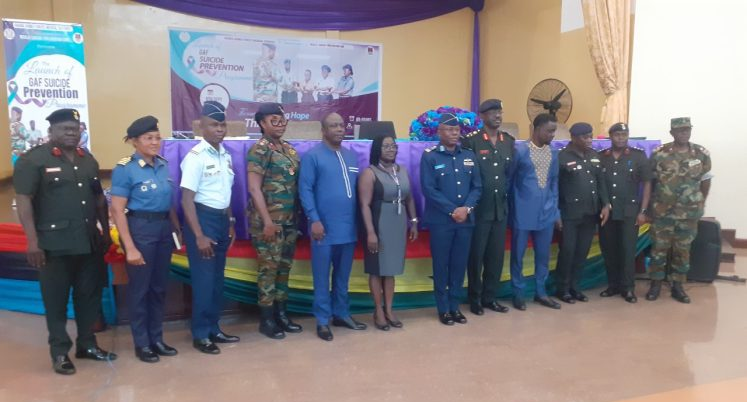 The Therapy and Wellness Department (TWD) of the 37 Military Hospital in Accra yesterday launched a suicide prevention programme (SPP) for the Ghana Armed Forces (GAF) at the Burma Camp as part of efforts to help prevent suicide cases among army personnel.

Under the programme, personnel will be educated on suicide and signs to look out for in a person with suicidal tendencies.

It also seeks to normalise mental health and ensure that the mysticism, stigma and discrimination that were linked to it were eliminated to ensure zero suicide in and out of service.

In a statement read by the Commander of the Hospital, Brigadier General Azumah Gbanwah Bugri, on behalf of the Director-General of the Ghana Armed Forces Medical Services, Brigadier General Raymond Kwablah Ewusi, he said good health was invaluable to everyone’s wellbeing.

He said the impact of mental health on military personnel right from entry, exit and in retirement had been established, adding that Post-Traumatic Stress Disorder (PTSD) was first identified among war veterans.

“Other mental health problems such as suicide, anxiety, depression, substance use disorder and behavioural problems, including gambling and interpersonal violence, especially at homes, have been found to be related to the traumatic exposure that the military encounter in the line of duty,” Brig. Gen. Ewusi added.

He further said that the physical training that ensured fitness to perform, as well as pre-deployment medical checks conducted regularly for every deployment were a regular feature, while mental health screening, including early identification of disorders and management for personnel had not been given much attention.

Brig. Gen. Ewusi added that considering the exigencies of the time, especially developments in the ongoing non-conventional warfare and cyber threats to the national, sub-regional and global security architecture, the Military High Command deemed it necessary to scale up all levels of mental health checks of soldiers.

The Deputy Director of Health Promotion of the Mental Health Authority (MHA), Dr Yaw Amankwa Arthur, said the initiative would ensure the mental wellbeing of “our gallant soldiers”.

“It is my hope that the military community will become more knowledgeable, sensitive to the psychological needs of its people and receive the needed help before a life is lost,” he added.