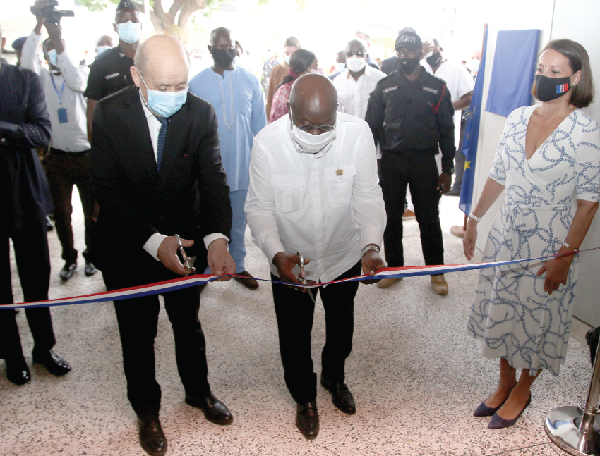 The French Embassy in Ghana has inaugurated a new building for its Chancery on the Fourth Circular Road in Cantonments in Accra.

The new site for the embassy became necessary because the former was situated close to the Jubilee House, the seat of Ghana’s Presidency.

The new building, which was designed by Lyon-based architectural firm, Segond-Guyon, is situated on a 1,540 square metre land, adjacent the United States of America Embassy.

It is largely made up of prefabricated architectural concrete units with wood siding and window frames made of local wood.

The premises, which support sustainable development with a green proposition, has 30 rooms, 25 of which are offices.

The President inaugurated the facility yesterday and pledged the country’s readiness to renew and deepen her relations with France for the progress and prosperity of people of the two countries.

He traced the relations between Ghana and France, which he said dated back many years, with the establishment of formal relations some 64 years ago.

President Akufo-Addo said the relations between the two countries were bound by common values of respect for individual liberties and human rights, adherence to the rule of law and the principles of democratic accountability which provided a strong base for cordial cooperation and collaboration by the two countries.

He described the recent exchange of high-level visits between the Presidents of the two countries as refreshing, adding that the visit by President Emmanuel Macron was the first by a French President. 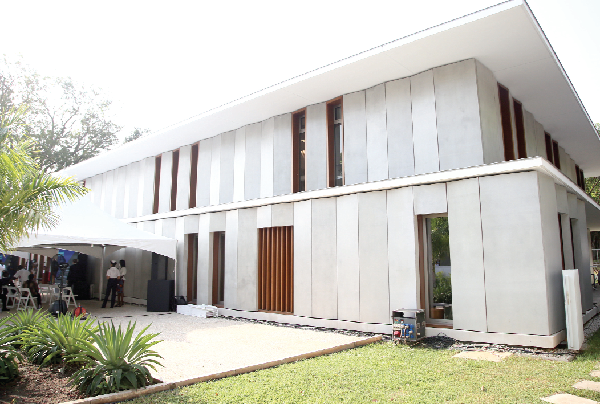 A view of the new Chancery of the French Embassy

President Akufo-Addo expressed the appreciation of the people of Ghana to the French government for its support in the sectors of agriculture, rural and urban development; local government administration, education, transport, water and sanitation, among others.

He also recalled that when the country was hit by COVID-19, France was one of the countries that solidarised with Ghana through the launch of a €1.2 billion joint health initiative and the donation of extraction kits to the Noguchi Memorial Institute of Medical Research.

He said that was evidenced in the country’s democratic credentials over the years which was reaffirmed in the conduct of the December 2020 general election.

“It is evident in the drive and dynamism that you have demonstrated, particularly in the digital sector. Once again, it is evident in your commitment to regional integration, whether within ECOWAS which you currently chair, the African Continental Free Trade Area (AfCFTA) whose secretariat Ghana is hosting, or even the regional security cooperation initiative which was launched here in Accra,” Mr Le Drian added.

He said because of its exemplary lead in African revival, Ghana could be considered as an incubator for the invention and implementation of the new partnership which France and Europe wanted to build with the African continent.