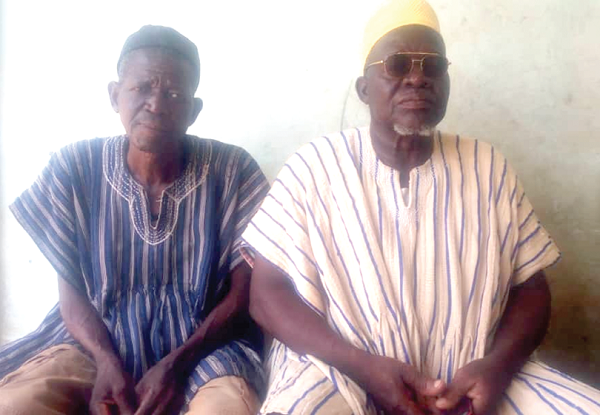 Mr Lawrence Bagbin (right), Head of the Bagbin family, and Mr Moses Bagbin, an elder of the family
30.5k Shares

Sombo, the hometown of Mr Alban Sumana Kingsford Bagbin, is in a buoyant mood following his election as Speaker of Parliament.

Family members and other residents of the small Upper West Regional town of about 5,000 people believe the election of the veteran legislator is a harbinger of greater things to happen to the community.

During a visit by the Daily Graphic to the town yesterday, 24 hours after Mr Bagbin won a tight election, the major discussion among the people was about the new Speaker and the benefits his elevation would bring to them and how it will accelerate the development of the town.

They said it was a fact that the Speaker did a lot for the area since he entered Parliament 28 years ago, but having assumed such a high position, the expectation was that he could influence more development in the community and the region at large.

Most of the people the Daily Graphic spoke to thanked God for making their kinsman the number three gentleman in the country.

They also praised the House for the confidence reposed in Mr Bagbin.

They urged him to continue to put up his best in the discharge of his duties to win the confidence and trust of all.

Sharing his perspective on the development, the Head of the Bagbin family, Mr Lawrence Bagbin, said the family was proud of the height the former legislator had reached in his working life.

He appealed to parliamentarians to cooperate with the Speaker to enact laws that will enhance good governance and deepen democracy in the country.

Mr Bagbin said after many years of service in Parliament, the position of the Speaker was undoubtedly a befitting icing on the cake for their kinsman.

"Let us see you and our MPs work together with tenacity of purpose for the development of the country by promulgating laws and policies that will inure to the welfare of the people.

"We, in a similar fashion are also praying to God to enable him to remain objective, impartial and tolerant of divergent views," he said.

A resident of the area, Mr Adams Muda, described him as a diligent worker who had reached the pinnacle of his career.

Mr Bagbin began his parliamentary career in 1992 on the ticket of the National Democratic Congress (NDC) and was retained by the people in the Nadowli-Kaleo Constituency in the subsequent Six Parliaments in the Fourth Republic.

His high sense of humour, dedication and transparency endured him to the people, thus making him a household name in the constituency.

He is widely seen in the Sombo area as someone who is deeply rooted in politics and good governance.