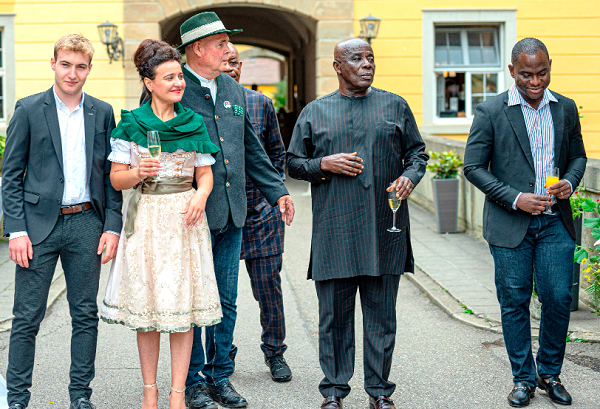 The Okyenhene, Osagyefuo Amoatia Ofori Panin, has called for a paradigm shift from commercial monoculture agriculture to sustainable organic farming to protect human health and the planet.

He said monoculture agriculture – growing only one type of a crop at one time on a specific field – also came with the heavy use of poisonous agrochemicals in food production.

Speaking at the fifth World Organic Forum in Kirchberg/Jagst in Frankfurt, Germany, last Thursday, Osagyefuo Ofori Panin said conventional farming could not continue to produce and prepare food in the old ways and expect to feed and sustain populations on methods that had serious deleterious effects on the environment, human health and the entire ecosystem over the years.

He, therefore, urged multinational agribusinesses not to place importance on profit margins ahead of protecting human health and nature.

“Diseases that medical science thought it had overcome are today coming back and we must eliminate the use of synthetic fertilisers, pesticides, veterinary drugs, genetically modified seeds and breeds, preservatives and additives in the food value chain to curb diseases and preventable disasters,” he said.

“Today, the food we eat, the water we drink and the air we breathe which form the life support system are being threatened by a consistent spread of toxic chemicals in the soil from which our food grows and by reckless mining,” he said.

“In the end, it is poor indigenous people who consume such poisonous pesticide residue, especially in Africa,” he added.

The Okyenhene raised similar concerns when he was accompanied by the Chairman of the Haus der Bauern Foundation, Rudolf Buhler, who is also the Founder of the Akademie Schloss Kirchberg, to visit the Farmers’ Headquarters (Ecoland) and the Schwaebisch City Hall, both in Frankfurt, to gain deeper insight into organic farming.

He was welcomed to Schwaebisch city in Frankfurt by the Mayor of the area, Daniel Bullinger.

The Okyenhene was accompanied by some of his sub-chiefs and lecturers from the University College of Agriculture and Environmental Studies at Bunso in the Eastern Region.

He noted that today’s consumeristic attitude and the maniac desire by multinational companies and individuals to grow the extra corn and increase shareholders’ value and build huge corporate and personal profits had brought untold disasters and failures to humanity.

In his view, abundant food production, through industrial farming, to feed the growing world population had been largely propagated on what he called “industrial intensive agriculture” that used heavy pesticides, weedicides and other harmful substances.

The environmentalist said protagonists of commercial agriculture had, in the past, justified that those agrochemicals were not only vital for the future of agriculture but were also harmless.

“Carson alerts the world that we are all being exposed to toxic pesticides throughout our lives – through residue left in the food we eat and the air we breathe,” he said.

“She wrote that every human being is contaminated with some poisonous chemical from conception till death, and that everything in nature is related to everything else,” the Okyenhene quoted the author as saying.

Drawing a difference between farming practices today and the past, Osagyefuo Ofori Panin said before the advent of modern agriculture, African ancestors lived lives of leisure and peace, yet they did not share European ideas about land use and ownership.

“Our ancestors’ land was their sacred heritage beyond price. Because they had no desire to place the sources of their survival into streams of commerce, they were viewed as ignorant and primitive. Their value systems were based on relationship and not currency.

“In spite of their perceived ignorance, they laid a deeper philosophical understanding of the need to respect and defend the rule of nature that says mankind is instructed to live in harmony with all species and not diminish or destroy them,” the eminent traditional ruler said.

He reminded agribusiness globally to acknowledge that they were part of nature and they must, therefore, accept that the solution to all problems of humanity began with valuing and treasuring nature.

“Every now and then, nature has a way of reminding us that it is in charge: COVID-19, hurricanes, flooding, earthquakes and many more disasters show nature’s force and serve as wake-up calls to action,” he added.