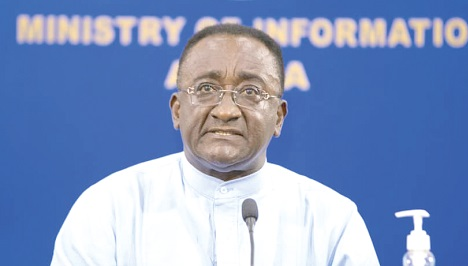 The Ministry of Food and Agriculture (MoFA) is considering offering fuel subsidies to transport firms and owners to enable them to haul foodstuffs to the market centres.

The provision of subsidised fuel coupons to the transporters is expected to cut the cost of transportation of foodstuffs from the production areas to urban centres.

The Minister of Food and Agriculture, Dr Owusu Afriyie Akoto, who announced this in Sunyani last Monday, said that had become necessary because of the rising prices of foodstuffs in urban areas which, according to foodstuff retailers, was due to the rising cost of transportation.

"We are fashioning out modalities so that a way will be found to cut down the transportation cost of foodstuffs, so that foodstuffs will be sold cheaper in the satellite markets and thereby force down prices in the traditional markets," the minister explained.

He said even though food prices were relatively cheaper in markets in the food producing areas, they had become expensive in the urban centres.

He explained that as part of the measures, the ministry would cause the transportation of food from the producing areas to selected urban centres to be sold at realistic bulk prices to force the prices on the open market to come down.

Dr Akoto said municipal and metropolitan assemblies in the selected urban areas would be asked to organise satellite markets, from where wholesalers, retailers and consumers would have the opportunity to buy foodstuffs.

He said that measure followed a stakeholders' forum in Accra to brainstorm on how to bring down the rising prices of foodstuffs in the urban areas.

"We believe that when we start implementing what we are fashioning out and foodstuffs are sold below what is prevailing in other markets in the urban areas, foodstuff sellers will be compelled to bring down their prices,” he said.

He said his tour of markets in the food growing areas had shown that there were enough foodstuffs, particularly cereals, in the system.

He added that notwithstanding the rising cost of agricultural chemicals and oil on the global market, which had had a negative impact on food production, the margin between the cost of foodstuffs in the producing and the urban areas was unimaginable.

"Comparing prices in the producing and the consuming areas, the difference is about three times," Dr Akoto said.

He indicated that with a basket of tomatoes in Techimantia in the Ahafo Region going for GH¢150, it was unbelievable that the same basket of the commodity was selling between GH¢400 and GH¢500 in Kumasi.

He said the rising cost of foodstuffs in urban areas was neither compatible with the increases in food production nor the transportation of foodstuffs from the farm gates to the urban centres.

The minister said it was as a result of those factors that the ministry last week called of all stakeholders, including parkers, drivers, transport owners and market queens, to deliberate on the issue.

"Somebody should be making super-normal profits out of the situation along the transportation and distribution chain of foodstuffs from the farm gate to the retailers," he said.

He said the rising cost of foodstuffs was of great concern to the government because of its impact on low income earners in the urban areas.

He said the ministry was convinced that the 2022 harvesting of food crops, which was just around the corner, would also help bring down the prices of foodstuffs.

"These are the two things — direct government intervention and the seasonal harvest, which is coming on board — that will definitely bring down the prices of foodstuffs in the urban areas," Dr Akoto said.