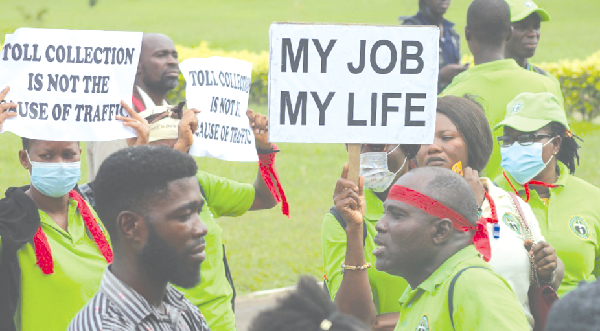 Some of the members of the Tolls Workers of Ghana carrying placards to express their grievance
30.5k Shares

The Toll Workers of Ghana on July 5 petitioned Parliament and appealed to President Nana Addo Dankwa Akufo-Addo to pay members their six months salary arrears and restore them to their previous jobs.

The association said returning to work would restore the fundamental human right of members to decent work, enable them to live in dignity and also generate income for the state.

“It is our prayer that our supplication for job protection will find favour with you within the shortest possible time,” the Secretary of the association, Edward Duncan, stated when he presented their petition after their march .

The members of the association were joined by their executive, including its Chairman, Henry Dogbe; the First Vice Chairman, Richard Amati; the Second Vice Chairman, Mariam Kareem, and the Assistant Secretary, Nurata Jibreel.

They had marched peacefully to Parliament carrying placards, some of which read “My job, my life”, “Toll collection is not the cause of traffic”, “Pay us our arrears” and “Fulfil your promise to us Hon. Amoako-Atta.”

Presenting the petition, Mr Duncan said the toll workers were members of the organised Professionals and Allied Workers Union, a reason an executive intervention would help them to regain their former jobs.

He said about 800 of workers of the association had their jobs curtailed and had been living in pain and misery, following the suspension of road tolls during the presentation of the 2022 Budget and Economic Policy by the Minister of Finance to Parliament in November last year.

“We were promised, Your Excellency, that our monthly salaries would continue to be paid until we were reassigned, but for the past six months, our salaries have been in arrears,” the petition which was addressed to the President said.

They said instead of being reassigned, the appointments of members who were working with the Tolls and Routes Management Ltd had been terminated.

At the same time, the promise to pay their salaries had failed and the situation had added them to the unemployed in the country, resulting in shattered households and the loss of their dignity.

Mr Duncan pointed out that the operation of the Tolls Workers of Ghana did not and had not been dependent on subventions of the state.

“On the contrary, road toll collection is a major source of regular income for the state through the Ghana Road Fund,” he said.

Mr Duncan indicated that averagely, the monthly revenue collected under Tolls and Routes Management Limited, the private company managing 20 of the major tolls in the country, was GH¢6.2 million.

He added that the tolls collected under Ghana Highway Authority worked out to a monthly average of GH¢900,000.

“In total, the monthly revenue generated from toll collections is GH¢7.1 million, which works out to a yearly average of GH¢85.2 million,” Mr Duncan said.

In addition to the above, the secretary said an online survey conducted on whether to restore the road tolls or not had 5,952 respondents, with 99.6 per cent of them in support of restoring the road tolls.

“The results from this survey is indicative of the fact that a greater number of Ghanaians are in support of the restoration of the road tolls,” Mr Duncan added.

Receiving the petition, Ms Alhassan assured the aggrieved members of the association that their petition would be presented to the Speaker to have their grievances resolved.

She commended them for resorting to peaceful protest to demand their rights to decent jobs.