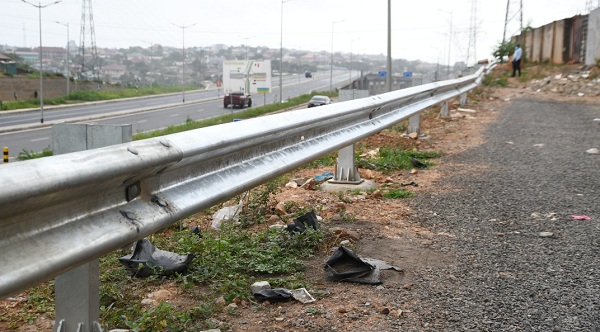 The galvanised crash barriers that were stolen at the newly constructed Pokuase Interchange have been replaced with new ones.

That was after a Daily Graphic reportage on the stolen barriers.

To forestall their being vandalised, the new barriers, covering 40 feet, have been secured with bolts and knots and also welded, thereby making it difficult to remove them.

The replacement exercise was undertaken by the contractor for the Pokuase Interchange and Local Roads Project, Zhongmei Engineering Group Limited, last Tuesday.

Yesterday, when the Daily Graphic visited the interchange, the barriers had already been fixed and that had attracted attention, as some residents came around to inspect the replaced barriers.

The Daily Graphic had, on Tuesday, October 5, 2021, reported that some unscrupulous persons had stolen some of the newly installed galvanised crash barriers mounted at the interchange, thereby posing a threat to road users.

All the stolen barriers, valued at $3,500 and meant to protect vehicles from falling over from a high embarkment onto the main road for vehicles coming from Kwabenya, covered a stretch of 40 metres.

The total number of crash barriers stolen was 10, each measuring four feet.

The barriers were mounted on a high embarkment or cliff to prevent vehicles using a service road from the Victoria College area at Pokuase from falling over from a height of about three metres onto the road from Kwabenya towards the main interchange.

According to the Resident Engineer of the Pokuase Interchange and Local Roads Project (Associated Consultants Limited), Mr Kwabena Bempong, measures were also being instituted to protect the crash barriers from theft and that welding of the bolts and nuts was one of such measures.

He had given an assurance that the barriers were going to be replaced to ensure the safety of users of the road.

A resident in front of whose house the barriers were stolen, Mr Kwasi Ntow-Frimpong, told the Daily Graphic that the replacement of the items was a laudable one aimed at ensuring road safety in the area.

Meanwhile, it has been established that five men wearing reflectors, with one in a helmet, stole the crash barriers.

Mr Ntow-Frimpong confirmed this to the Daily Graphic yesterday.

“One dawn I was on my way home and I saw five men dressed in reflectors removing the barriers. I thought they were repositioning them and so we did not ask them any question.

“They came with a KIA truck in which they packed the barriers,” he said, adding that “the way they dressed, we thought they were part of the workers working on the project and so we did not confront them”.

The incident, he said, happened about 5 a.m. on the day the crash barriers were stolen.

Mr Ntow-Frimpong said two days after the thieves had made away with the barriers, he confronted some of the real workers surveying the place on why they had removed the barriers, and it was then that it dawned on him that they (barriers) had, indeed, been stolen.

The incident, he said, had opened his mind to such activities by criminals.

That, he said, was the second time such a thing was happening, and that the first time was when his son told him that he had seen some people removing cables in the area.

“I confronted them, and when they saw me removing my phone, they bolted,” he said.

Regarding the replacement of the barriers, he said it was good news, since their removal posed a danger to motorists and pedestrians.

Pokuase Interchange theft must be halted!