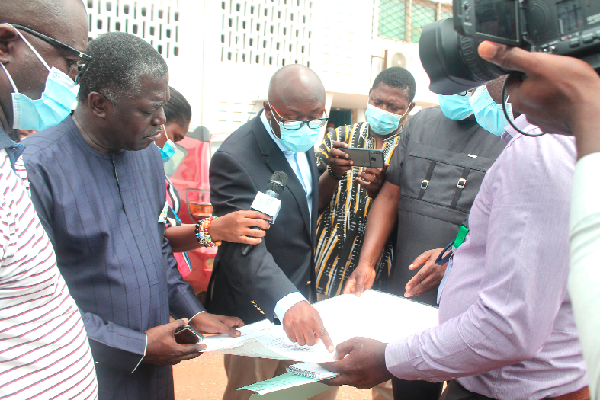 The Deputy Minister of Lands and Natural Resources, Mr Benito Owusu-Bio, has directed that all construction works on the state land that hosts the Pantang Hospital in the La Nkwantanang Municipality in the Greater Accra Region should cease with immediate effect.

He has also asked private developers to stop working on the disputed land at the frontage of the hospital pending the amicable resolution of land title and compensation issues.

The Deputy Minister gave the directive when he paid a working visit to the Pantang Hospital yesterday to check on the hospital's land and other resources under the authority of the ministry.

The Pantang Hospital rests on a 344-acre land which was acquired by the state through Executive Instruments 25 and 42.

But the hospital has lost over 70 acres to encroachers for over a decade now.

The takeover of portions of the land by private developers and associated activities of land guards have led to a number of violent clashes in the area.

Recently, some irate youth broke down a wall that the hospital authorities were constructing to guard against encroachers.

Currently, some private developers have built close to some installations of the hospital, with most of the buildings sited at the frontage of the hospital.

Although the hospital authorities have built a wall to protect their land, parts of the wall have been broken, with some private development ongoing within the walled area.

Some of the buildings are close to an infectious disease centre that has recently been converted into a COVID-19 holding centre.

Mr Owusu-Bio, who expressed disappointment at the development, said it was unacceptable that even as the Public Vested Land Division of the Lands Commission was engaging the Ministry of Health and traditional authorities on compensation issues, private developers were busy at work.

"I want to call on the traditional authorities to stay their hands off the land here while the engagement process is ongoing," he said.

The Director of the Pantang Hospital, Dr Frank Baning, said the encroachment activities raised serious security concerns for the staff of the hospital and their clients and appealed for prompt action to address the issue.

"As you have seen for yourselves, there are private buildings close to health installations, including the ambulance centre, medical patients department and the COVID-19 centre; and this is not good for public health," he said.

Dr Baning said it was important for the state authorities clothed with the mandate to protect government lands to act swiftly to protect the hospital's land from further takeover.