Pokuase Interchange theft must be halted! 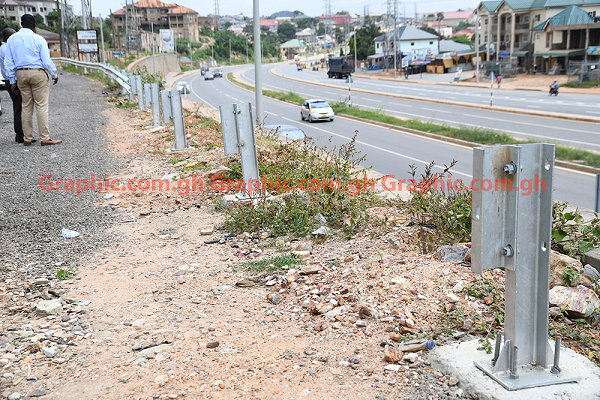 Successive governments have done their best to provide basic amenities such as roads, schools and hospitals for the people. The provision of these amenities has, however, been prioritised

So when these social amenities are provided, the expectation is that they will offer value for money to serve their purpose for generations.

That is why reported criminal acts by some unscrupulous persons, who have begun stealing the galvanised crash barriers installed on the newly constructed Pokuase Interchange, are very worrying. (See story on front page)

It is unthinkable that after such a landmark project has been provided, some people with criminal intent will turn around and either steal or vandalise the infrastructure.

It is difficult to understand why some people, for their selfish interests, will carry out such criminal act and vandalise an infrastructure that was inaugurated barely three months ago.

In our front page story of Tuesday, October 5, we reported that preliminary investigations indicated that the perpetrators first stole four streetlight connectors and subsequently plunged the area into darkness before carrying out their ‘operation’.

It is sheer wickedness and a complete lack of appreciation for the safety of others for such nation-wrecking acts to be committed, as those behind this unnationalistic act will just sell the crash barriers as scrap at a price far less than the cost of providing them, aside from the many lives that have been put at risk before the authorities refix the barriers.

The stolen crash barriers, the project engineer says, are valued at $3,500 and meant to protect vehicles from falling over from a high embarkment onto the main road for vehicles coming from Kwabenya. The barriers cover a stretch of 40 metres.

How the theft happened remains a concern, as there are supposed to be security cameras mounted to give the security agencies the lead on the causes of road crashes and also help provide information on any incident such as what has happened.

It is good that the police and the Ga West Municipal Security Council have promised to beef up security and patrol the area to avert the recurrence of the act. Also, the police say they are on a manhunt for the perpetrators.

The Daily Graphic urges the police to go beyond fishing out for the perpetrators to also look for the people who may possibly buy the stolen barriers as scrap, as it seems that is what they are intended for.

Indeed, the Daily Graphic will suggest that the security agencies keep an eye on similar infrastructure on other roads, as it is possible similar acts are being perpetrated in those areas as well.

Additionally, the regular theft of metal culverts on drains on various roads which also poses a threat to road users and pedestrians should be investigated as, perhaps, the same perpetrators who have for long carried out that act but have not been found out are now extending it to the crash barriers.

While it is not possible for the police to patrol the area 24 hours, there could be an effective solution — we must mount cameras and make sure they are monitored stringently to ensure that anyone who attempts to vandalise the facility is promptly arrested and dealt with.

Also, we encourage citizens to live up to their civic responsibilities and report any suspicious incidents to the police for action. For if we all sit down unconcerned, the situation could come back to haunt us.

As Bob Cole, a musician and actor, sang: “There is no issue that does not concern us. If a neighbour is misbehaving and we close our eyes to it, all of us may end up paying the price for it!”