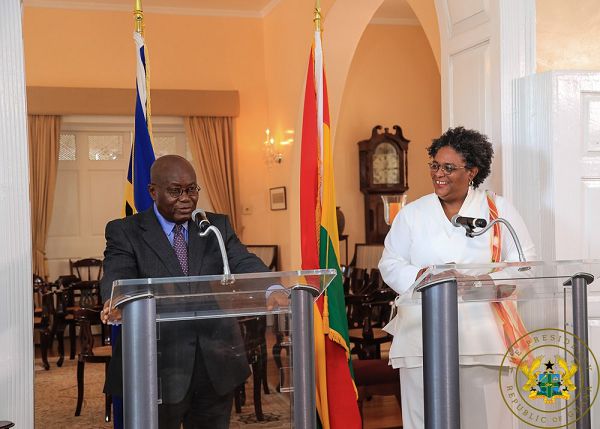 President Akufo-Addo with members of the Ghanaian community in Barbados
30.5k Shares

The President, Nana Addo Dankwa Akufo-Addo, has agreed in principle to send about 375 Ghanaian nurses to Barbados to work in government medical facilities in that country.

The Prime Minister of Barbados, Ms Mia Amor Mottley, put in the request for the services of nurses from Ghana during bilateral talks with President Akufo-Addo in Bridgetown, Barbados, last Friday when the President paid a day’s working visit to that country.

Addressing a press conference after the bilateral discussions, the Barbadian Prime Minister stated: “We have indicated that we are searching for just under 400 nurses, so it is not a small number, and we really do believe that this is a wonderful opportunity of co-operation between our two
countries.”

Barbados, which has a population of almost 300,000, is facing an acute shortage of nurses and other health workers.

Ms Mottley indicated that there was an initial promise of the request being granted and the provision of joint educational programmes, going forward, both in an attempt to secure the healthcare sector of Barbados.

For his part, President Akufo-Addo said: “We have a surplus of nurses in Ghana and placing them all in our public health system is one of my headaches.”

He said many nurses had been produced and for several years the government had not been able to effectively utilise their services.

“I will be back in Accra on Monday, and the week after the Prime Minister will hear from me on this matter of nurses,” the President added.

With President Akufo-Addo being the first Ghanaian leader to visit Barbados, the two leaders agreed to reactivate a 2005 cultural, technical and scientific agreement signed between the two countries which had been dormant for 14 years.

The discussions also touched on tourism and transportation and the two countries agreed to work on an air services agreement under which  direct air links would be established between the two countries to boost trade and people-to-people contact.

On renewable energy, President Akufo-Addo expressed Ghana’s desire to collaborate with Barbados, a country which had made giant strides in that field, and reiterated Ghana’s commitment to increase the renewable energy component of its energy generation mix to a minimum of 10 per cent.

As a demonstration of the close ties between Ghana and Barbados, President Akufo-Addo expressed his commitment to the establishment of an Honorary Consulate in Barbados, with Barbados set to establish a High Commission in Accra by the end of 2019.

After attending the International Labour Conference in Geneva, Switzerland, President Akufo-Addo started a six-nation tour of the Caribbean.

He visited Guyana, St Vincent and the Grenadines, Trinidad and Tobago, Barbados and Jamaica, where he held bilateral talks with the respective presidents and prime ministers.

During his visits, President Akufo-Addo promoted the Year of Return in the Caribbean.

The Year of Return, which is to commemorate the 400th anniversary of the beginning of the Trans-Atlantic Slave Trade, commenced with a launch in Washington, DC, in the United States of America last year.

Activities lined up for the year-long celebration include a homecoming, investment summits, the African-American Investment Forum and the Pan-African and Emancipation Day celebration.

The commemoration is expected to consolidate and strengthen ties with Africans in the Diaspora and extend the free movement protocol to all those who would want to come and see or stay in Ghana.