3 Storm drains in Accra, Weija to be completed soon

Work on three storm drains in Accra and Weija is progressing steadily, with officials promising that the projects will be completed within a year’s time.

This came to light when the Deputy Minister of Works and Housing, Abdulai Abanga, inspected the projects, which are expected to address flooding in Accra.

He was in the company of some engineers from the Hydrological Service Department under the Ministry of Works and Housing.

It was observed during the inspection that the Weija GICEL drain had been completed.

The floodwaters obstructed some roads within the area, as well as other parts of the Greater Accra Region.

Mr Abanga gave an assurance that by next year, the Kaneshie First Light project as well as other drainage projects within the area, would be completed to help address flooding.

As part of the Flood Control Programme which is being implemented to improve settlement resilience across the country, he said the government had made available GH¢50 million to complete some 21 drainage facilities in the country.

He said some of the projects had commenced while the contracts for others were yet to be awarded.

Mr Abanga expressed the hope that all the 21 projects would be completed within one year to help improve the flooding situation in the country.

He further entreated Ghanaians to adhere to proper solid waste disposal practices to help curb perennial flooding in the country. 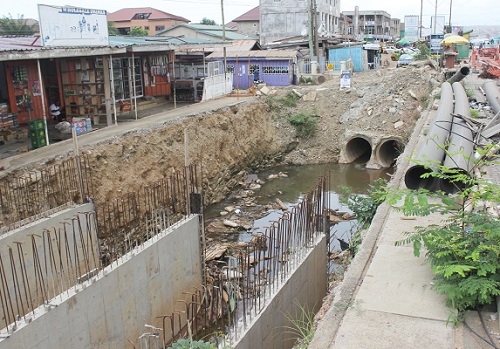 The state of a drainage facility at Weija Old Barrier

He noted that the indiscriminate dumping of solid waste into drains contributed significantly to urban flooding by blocking drains, thus, causing storm water to overflow into homes and business premises.

“We need to be disciplined and dispose of solid waste properly because drains are meant to carry water and not solid waste. Drain construction is a very expensive project so if they are provided and people decide to dump solid waste into them, it means we are not going to get the needed results,” Mr Abanga stressed.

The Head of Drainage at the Hydrological Service Department, Richard Amekor, confirmed that the Kaneshie First Light storm drain project would help alleviate the perennial flooding in the area.

He said the project would link the roadside drain into the underground drains to address the spillage.

He said several other drainages under the Greater Accra Resilient and Integrated Development Project (GARID) were being constructed, and gave an assurance that many would be completed within three months.