Our friendship extends to all levels - Norwegian Ambassador assures Ghana 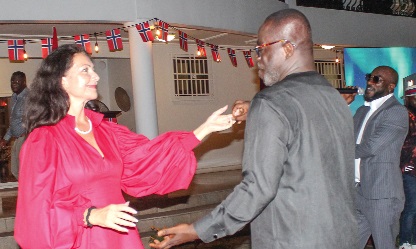 The Norwegian Ambassador to Ghana, Ingrid Mollestad, has said that the bond of friendship and cooperation between her country and Ghana extends to all levels, a reason the two countries must strengthen their partnership for their mutual benefit.

She said currently the two countries enjoyed a close relationship, noting that she, as Norway’s Ambassador to Ghana, was both very “happy and proud of our strong and ever-strengthening partnership”.

“We work together and see eye to eye in many areas, including the maritime field, fisheries, energy, the health sector, education, food security and multilateral affairs, as we are both members of the United Nations Security Council,” she said.

Ms Mollestad said this at the commemoration of Norway’s Constitution Day at her residence in Accra last Tuesday.

The Constitution Day is the national day of Norway and official public holiday observed on May 17, each year.

The day came into being at Eidsvoll on May 17, 1814 and the Constitution declared Norway to be an independent Kingdom in an attempt to avoid being ceded to Sweden after Denmark-Norway’s devastating defeat in the Napoleonic Wars.

Last Tuesday’s event attracted people from all walks of life, including ministers of state, Members of Parliament, members of the Diplomatic Corps, celebrities, academics, among others.

Shedding light on the Constitution Day, the Norwegian Ambassador said the day represented something very special to Norwegians, as that country’s Constitution was still in force, making it one of the oldest in the world.

“Also, May 17 has come to represent our independence, our peace and our freedom,” she emphasised.

Ms Mollestad recalled the visit by the Norwegian Prime Minister to Ghana in 2019 and President Nana Addo Dankwa Akufo-Addo’s visit to Norway just a few weeks before the outbreak of the COVID-19 in 2020.

“We do hope to welcome President Akufo-Addo to Norway soon again. Norway has welcomed many Ghanaians to live, work and study over the years, as evidenced by the presence of the newly established Ghana-Norway Alumni Association,” she said.

Some guests at the event

Touting the cordial bilateral relations between Norway and Ghana, the Ambassador expressed happiness over the high-level forum for trade and investment which was successfully held in Ghana at the end of 2021.

A Deputy Minister of Energy, William Owuraku Aidoo, commended Norway’s commitment to address peace and security issues in Africa, including funding the training of police officers from all over Africa at the Kofi Annan International Peacekeeping Training Centre (KAIPTC).

“Under THE KAIPTC’s present strategic plan from 2019 to 2023, Norway is currently the major and core funder of the centre that is training police officers who continue to serve as peace officers in some of the continent’s deadliest conflicts,” he said.

Mr Aidoo said Ghana, indeed, cherished its relations with Norway and welcomed the opportunity of collaborating in various areas where assistance was needed, such as on initiatives that promoted global peace and security, climate change, support for commercial farming, creating jobs for the youth and expanding opportunities for the vulnerable in society, including persons living with disabilities.

He was also happy that Ghana and Norway had collaborated on issues concerning petroleum governance since Ghana first discovered oil in commercial quantities in 2007, saying: “We have benefitted tremendously from Norway’s ‘Oil for Development’ programme.”