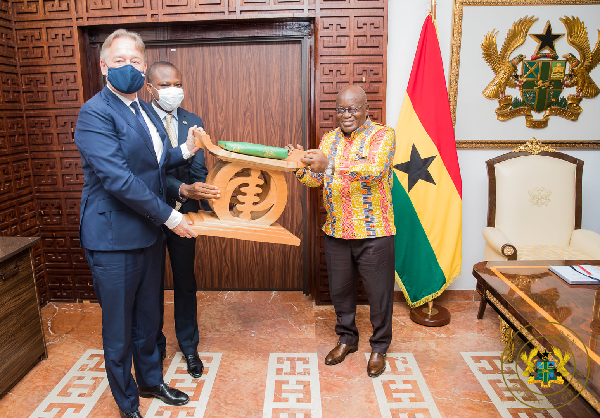 Ghana is committed to injecting new impetus and dynamism into its new trade relations with the United Kingdom (UK), President Nana Addo Dankwa Akufo-Addo, has stated.

He said the agreement, which was forged between the two nations after the exit of the UK from the European Union (EU), had strengthened bilateral and trade relations between Ghana and the UK for the mutual interest of their people.

President Akufo-Addo said this yesterday when the outgoing UK High Commissioner, Mr Ian Walker, called on him at the Jubilee House to bid him farewell. Mr Walker has completed a four-year duty tour of the country.

Ghana entered into a new trade deal with the UK this year to form the basis for trade between the two nations since the economic partnership agreement between Ghana and the EU was not binding on the UK.

President Akufo-Addo touched on the 300-year relationship between the two nations and indicated that it had a major impact on the lives of their people.

He commended Mr Walker for a successful tour of duty and urged him to be an ambassador for the country in his new endeavour, adding: "We appreciate very much the work you have done here." The President noted that very important officials from the UK visited Ghana during the tenure of Mr Walker.

"The energy and the concern you brought to bear on your work here made it clear to us that you have the best interest of our country at heart.”
President Akufo-Addo indicated that the outgoing High Commissioner had set a difficult pattern for his successor to follow.

"Our official language is your language. Many of our institutions are firmly modelled to British institutions. Our system of law in Ghana is based on the common law in your country. All of these are as a result of the intercourse between our people and yours," he said.

President Nana Addo Dankwa Akufo-Addo presenting a gift to Mr Ian Walker (left), outgoing UK Ambassador to Ghana, as the latter bids farewell to Ghana after a four-year tour of duty in Ghana.

Mr Walker, for his part, thanked the government for the support and added that he made a conscious effort to visit most parts of the country.

"I guess time flies when you are having fun but it has been a phenomenal honour and privilege to represent my country here in Ghana," he said.

President Akufo-Addo said Ghana appreciated the way and manner the ambassador had worked for Ghana, his understanding, empathy and sympathy for Ghana’s situation, especially the advocacy for the country in Berlin.

The President noted that that had been possible because he also had a good relationship with the political leadership in Germany.

He mentioned the German compact with Africa, of which Ghana had been a major beneficiary and other initiatives.

Mr Retzlaff said the relationship between Ghana and Germany had become even stronger with the visit of Chancellor Angela Merkel to Ghana in recent times and a lot of the state-of-the-art projects that were launched by the German government in Ghana.

Those, he said, included the launch of the VW Assemblying Plant and the solar power plants in the Upper West Region.

“I would like to thank you, Mr President, for the trust and commitment to Ghana-German friendship, and I am happy to say I was able to commit a bit to the strengthening of this relationship,” he said.