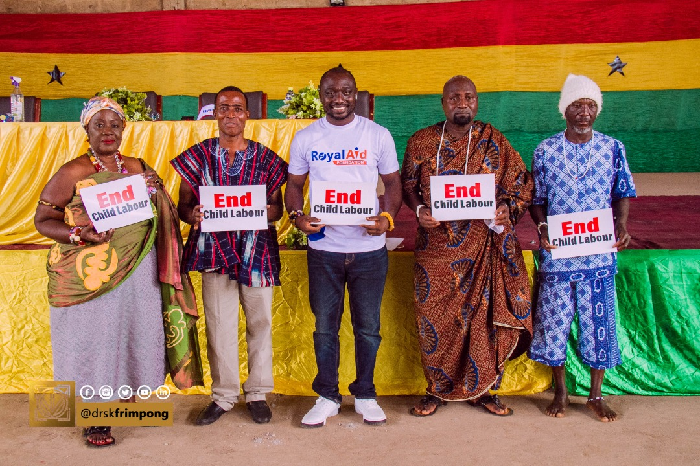 Founder of RoyalAid Foundation, Dr S.K. Frimpong (middle) together with some dignitaries at the seminar holding placards with inscriptions to end child labour in Ghana

The Founder of RoyalAid Foundation, Dr S.K. Frimpong, has stressed the need for all to come on board in the fight against child labour in the country.

For him, the country could end the menace of child labour through collective efforts, noting that the practice where children are engaged in child labour activities negatively affect their development and general wellbeing.

“I firmly believe that the fight against child labour is a collective responsibility,” he noted.

Dr SK Frimpong made the remarks when his Foundation organised a one-day seminar to sensitise some fishermen and parents within the Kpone Katamanso District of the Greater Accra Region on child labour on June 12, this year.

The seminar was part of activities by the Foundation to mark this years, World Day Against Child Labour, which is celebrated on June 12 every year.

Each year on 12 June, the World Day Against Child Labour brings together governments, employers and workers organisations, civil society, as well as millions of people from around the world to highlight the plight of child labourers and what can be done to help them.

The World Day Against Child Labour aims to focus attention on the global extent of child labor and the action and efforts needed to eliminate it. This international day was launched by the International Labour Organisation (ILO) in 2002.

It is estimated that almost one in ten of all children worldwide are in child labour. While the number of children in child labour has declined by 94 million since 2000, the rate of reduction slowed by two-thirds in recent years. Target 8.7 of the UN Sustainable Development Goals calls for an end to child labour in all its forms by 2025.

This year’s celebration was held on the theme: “Act Now: End Child Labour.”

The seminar was specially used to discuss the harmful mental and physical problems faced by children forced into child labour.

Dr SK Frimpong highlighting the negative effects of child labour on the development of children to the participants at the seminar, appealed to parents and caregivers to support the government’s efforts in the fight against child labour in the country.

He noted that government over the years had worked with the various NGOs and civil society organisations in the country to end the menace of child labour, noting that the practice could only be ended when parents and caregivers, who are key stakeholders in this regard, lend their support to the fight.

He said although parents could engage their children in some form of work, “any work that is mentally, physically, socially or morally dangerous and harmful to children and interferes with their schooling by depriving them of the opportunity to attend a school or requiring them to attempt to combine school attendance with excessively long and heavy work is child labour.”

In his remarks, the Kpone Katamanso Municipal Chief Executive, Solomon Tettey Appiah, encouraged parents and caregivers within the district to desist from using their children in child labour.

For him, parents should rather be interested in their children’s education, saying that “education is now free from creche to SHS.”

He also encouraged the assembly members who were present at the event to continue to educate their constituents about the negative impacts of child labour.