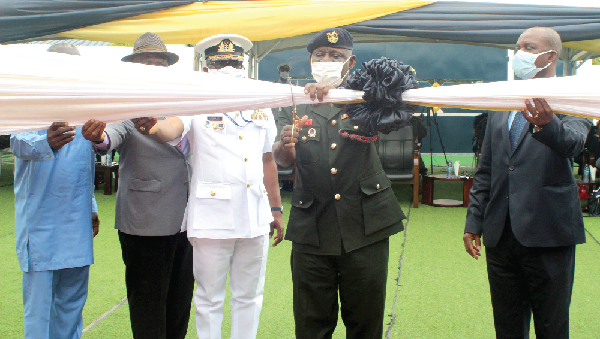 Lieutenant General Obed Boamah Akwa (2nd right), Chief of the Defence Staff, being assisted by some former Chiefs of the Naval Staff to inaugurate the block

The Ghana Navy has inaugurated a 16-unit accommodation block for officers at the Navy Wardroom in Accra.

The facility, sited near the Jubilee House, has 16 one-bedroom apartments.

It is named the KP Faidoo Lodge, after a former Chief of the Naval Staff, Rear Admiral Peter Kofi Faidoo, for his enormous contribution towards the project while he was in office.

It will serve as transit quarters for officers on operational and administrative duties in Accra.

The new block replaces an old facility, a pre-colonial building of a block of single room units that served a similar purpose but was demolished for the 16-unit block.

Although the project started in 2015, it stalled for three years due to the lack of funds until it was reactivated in September 2018 and completed with internally generated funds.

The 16-unit apartment for the Navy, near the 37 Military Hospital in Accra

Rear Admiral Faidoo (retd) urged the authorities to ensure the continuous maintenance of the edifice to make it last longer.

He said it was to serve as transit quarters and not a permanent accommodation for officers, and, therefore, advised against the tendency of going against the purpose for which it had been constructed.

“I have no doubt that our officers will, as always, show their high sense of discipline and maintain the facility well, since that is the only key to the new building standing the test of time,” he added.

The Chief of the Naval Staff, Rear Admiral Seth Amoama, said the completion of the project had brought much relief to the Navy, since accommodation for transit staff in Accra had always been a challenge over the years.

According to him, officers sent to Accra for operational and other administrative duties always struggled to find accommodation and had to be put up in hotels far away from the Navy Headquarters.

That, he said, posed difficulty in sustaining morale among officers, which was inherent in a healthy and vibrant mess life.

“I am extremely excited to note that this beautiful edifice will help in the ongoing quest by the government to solve the accommodation deficit in the Armed Forces in general and the Navy in particular,” he added.

The Chief of the Naval Staff expressed gratitude to the government, the Ministry of Defence and the contractors, Edrick Construction Company, for the execution of the project.

He also thanked all his predecessors whose efforts culminated in the completion of the project, especially Rear Admiral Geoffrey Mawuli Biekro, who conceived and initiated the project, and Rear Admiral Faidoo, under whose watch the project started.