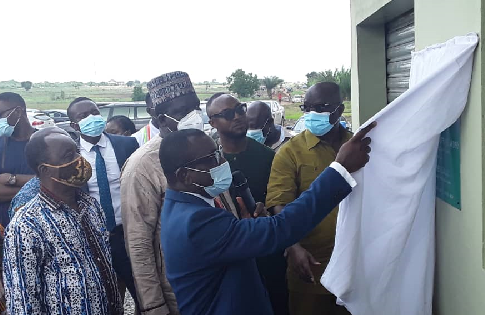 Mr. Kennedy Nyarko unveiling the plaque to officially inaugurate the Packhouse, while other dignitaries look on
30.5k Shares

The Ministry of Food and Agriculture (MoFA) has inaugurated a GH¢2.7 million vegetable packhouse for the sorting and packaging of vegetables to improve hygiene and the shelf life of the produce.

Known as the Improved Irrigation Infrastructure and Vegetable Packhouse, the facility is an important infrastructure in the vegetable value chain.

The packhouse and irrigation system, which was inaugurated for the Michel Camp Irrigation Scheme at Michel Camp, near Tema in the Greater Accra Region, yesterday, will provide linkages among farmers, buyers, high-value markets and transportation services, with the ultimate aim of reducing post-harvest losses.

As part of the packhouse and irrigation scheme, the farmers have been linked to eight production partnership entrepreneurs (PPEs), including A.B. Farm Ventures, Akuafo TV and Investments Limited, Farm Direct and Fruitmasters, who are the offtakers.

The facility, which has been constructed under the Ghana Peri-urban Vegetable Value Chain Project (GPVVCP), comes under the Ghana Commercial Agricultural Project (GCAP), a programme meant to shift agriculture from the subsistence level to commercialised business ventures by improving irrigation facilities with climate-smart techniques, such as the construction of in-field reservoirs, the installation of solar-powered equipment to pump clean water to upland areas for irrigation, among other things.

Peri-urban agriculture refers to agriculture undertaken at places on the fringes of urban areas.

Inaugurating the project, the Deputy Minister of Food and Agriculture in charge of Horticulture, Mr. Kennedy Nyarko, explained that the objective was to improve productivity and access to markets for vegetable farmers in selected peri-urban communities in the country.

He explained that the Michel Camp project was part of the overall GPVVCP, financed by a grant from the Japan Social Development Fund (JSDF), estimated at $2.85 million (equivalent to GH¢16.53 million) and managed by the World Bank through a trust fund arrangement.

“This is directly aligned with the ministry’s flagship interventions — the Planting for Food and Jobs and Planting for Exports and Rural Development programmes,” he said.

To achieve the objectives, he said, some general interventions, including upgrading irrigation facilities, building capacity, ensuring market linkages, providing packhouses and washrooms, among others, were being implemented.

The Project Coordinator of the GCAP, Mr. Osei Owusu-Agyeman, said what started as a simple and small activity aimed at providing improved access to water for farmers had grown to become a landmark activity, delivering significant intervention.

Among interventions being implemented, he said, were the rehabilitation and modernisation of irrigation infrastructure to provide reliable water all- year round, the use of an efficient energy source by way of the installation of a solar-powered pump and the provision of a vegetable packhouse to help clean and package produce from the farms.

Other mediation efforts included providing washroom facilities to address the hitherto insanitary environment, which is a key element of the UN Sustainable Development Goals (SDGs), the introduction of farmers to new skills sets to enhance productivity and strategies that allowed farmers to compete favourably on domestic and global markets.

The coordinator said as part of the Michel Camp Irrigation Scheme, farmers would be given hands-on training to be able to address challenges relating to pests, agronomy and harvesting.

The farmers would also be introduced to new high-value vegetables, while agricultural extension officers would be trained by the Horticulture Development Unit of the Directorate of Crop Services of the ministry, he said.

Mr. Owusu-Agyeman announced that some of the farmers were undergoing training to be awarded the Global Gap Certification and the Green Label Certificate, while others were being linked to established markets through contracts with appointed vegetable entrepreneurs.

The World Bank Task Leader to Ghana, Dr. Sheu Salau, urged the farmers to see the facilities as theirs and manage them well, so that they would be useful to them.

He further reminded the farmers of the key issues of sustainability, which he said were about operations and maintenance.