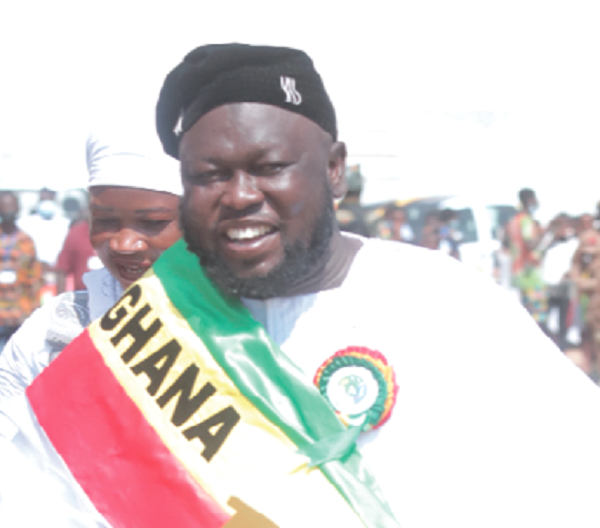 The National Best Farmer for 2021, Alhaji Mashud Mohammed, was still in disbelief a day after he was crowned with the national honour, when the Daily Graphic caught up with him in Accra.

He said even though he was aware that his farm merited an award of that magnitude, he always believed that someone was better than him and that the invitation to Cape Coast for the award ceremony would not earn him the ultimate.

“So, on that day, during the ceremony, when my name was mentioned, I did not even hear it until my wife drew my attention that I was being called as the overall winner.

“I got up confused, over-excited and could not believe myself,” Alhaji Mohammed told the Daily Graphic at the Alisa Hotel, where he was lodging awaiting to emplane back to Tamale.

For him, all that he wanted was the recognition that he was part of those who contributed to feeding the nation.

“That was all that I wanted; that the President of the nation and Minister of Agriculture will tell me on a national platform that I have done well. That alone, for me, was sufficient. After all, whatever I get from the farms are mine,” an elated Alhaji Mohammed told the Daily Graphic.

Alhaji Mohammed was grateful to the sector Minister, Dr Owusu Afriyie Akoto, and more importantly to President Nana Addo Dankwa Akufo-Addo, as well as the national selection committee for choosing him and recognising his contribution to food sufficiency and food security in the country.

The 44-year-old farmer, a Dagomba by ethnic origination from the Mion District in the Northern Region, who is a father of four, advocates students seeking internship or national service to do so with established farmers to enable them to appreciate farming as a professional venture worthy of pursuing.

For him, if the youth developed interest in farming, the country would not only be food sufficient, but there would be wealth because there was a lot of money in farming.

How it all started

Walking the Daily Graphic down memory lane, Alhaji Mohammed said until 2016, it never occurred to him that he should quit his professionally trained area – teaching, which he loved dearly to take to full-time farming.

Even though he was doing subsistence farming since his youthful age, while in school and alongside his profession as a trained teacher, with two or so acreage, his intention was to complement whatever he earned as a teacher to be able to take care of his family very well since 2006.

However, in 2008, Alhaji Mohammed, upon realising that he was making enough money through his farming activities decided to register a company known as Cudjoe Abimash Enterprise to incorporate his farming and other activities.

His interest in farming grew in 2010, when he secured a 20-acre farm, “and I realised that anytime I invest in the farm, I gain more than double,” Alhaji Mohammed told the Daily Graphic in a chat shortly after he was crowned the National Best Farmer in Cape Coast.

He realised from all that he was doing that the farming was the most profitable. That was the beginning of the expansion of the farms.

In order to have time for his farming business and not sacrifice the learning outcomes of the children under his care, Alhaji Mohammed stepped out of the classroom in 2017 into the farm to not only make money, but to feed the nation.

So, from a classroom teacher at the Sanzirigu Mujahadat E/A Primary School, Alhaji Mohammed was last Friday, December 3, 2021 crowned the National Best Farmer and smiled away with a fat cheque for GH¢600,000 and other accompanying prizes.

And so, from a humble two-acre farm size, Alhaji Mohammed currently cultivates 850 acres of maize, 19 acres of tomatoes, 43 acres of okro, 48 acres of sorghum, four acres of shea, 13 acres of mango, a 1,400-cashew plantation, among others.

Until 2018, Alhaji Mohammed was the chief driver, accountant, manager and everything of the farm, which only had a tractor and a KIA pickup to cart his farm products, convey fertiliser and everything that was done on the farm.

Today, with 51 permanent employees and over 1,000 casual workers, Alhaji can boast 18 tractors, six combined harvesters, planters, boom sprayers among all the machinery required for a modern farm, with a full agricultural value-chain sector.