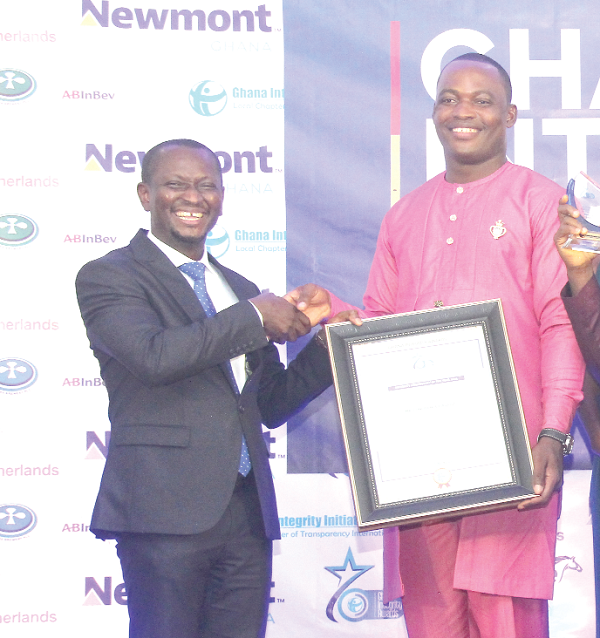 A Deputy Attorney-General and Deputy Minister of Justice, Mr Alfred Tuah-Yeboah, has called for a concerted effort involving all Ghanaians to win the fight against corruption in the country.

He said it was evident that over the years, corruption had constrained national development by emptying the scarce resources that could have been used to improve infrastructure, strengthen educational systems and fortify the health sector.

Speaking at the second edition of the Ghana Integrity Awards, which took place in Accra last Thursday, Mr Tuah-Yeboah admitted that fighting corruption was a Herculean task that needed more than only the government or other mandated officials to carry out, and that it would require everyone to tackle it.

“This is not a responsibility that just falls on the government or other official bodies. Each of us has a role to play in combating corruption and none of us should be under any illusion, as it is a Herculean task that lies ahead of us,” he emphasised.

The awards were organised by the Ghana Integrity Initiative (GII) to recognise the efforts of outstanding individuals and public sector institutions who are upholding personal and professional integrity and undertaking initiatives aimed at reducing corruption in the country.

Individuals who won awards at the night were the investigative journalist, Mr Manasseh Awuni Azure, and a police detective at the Kaneshie Police Station, Mr Confidence Fiagadzi, who were crowned Integrity Personalities of the Year.

The National Commission on Civic Education (NCCE), the National Identification Authority (NIA) and the Internal Audit Agency (IAA) were the state institutions that were rewarded on the night

Mr Tuah-Yeboah said since acts of corruption did not involve an individual committing the act but involved two or more persons, it was important for all to play a key role to deal with the canker.

“Everybody should reject and despise firmly any corrupt practice, and when someone is aware of such practices, the best course of action will be to report them to the competent authorities,” he said.

He commended the media for exhibiting bravery by uncovering and reporting on some of the most blatant abuses of the system.

He also said the use of communications technology and social media networks was helping to improve transparency in the country.

The Africa Centre for Energy Policy (ACEP), he said, had also reported that Ghana lost about $2 billion every year through illicit financial flow.

“So if we save these, block the loopholes and act ethically as businesses, we won’t need to pay the many taxes the government is proposing,” he said.

As a country, he said, it was important to make the fight against corruption define Ghana’s values.

Also, he said it was important to decide on appropriate disciplinary actions against people caught in the act, preferably naming, recovering and punishing.