The GH¢1.4 million project is expected to reduce the challenges teachers face in the school such as using corridors of their classrooms as offices and a common room.

The project consists of offices, teachers’ lounge, a library and washrooms for staff. It is also equipped with furniture and air-conditioners to facilitate effective teaching and learning.

The Chief of Staff, Akosua Frema Osei-Opare, inaugurated the building, which is named after Dr Okoe Boye’s mother, Mary Atswei Adjetey. The library and some offices were also named after the First Lady, Rebecca Akufo-Addo; a former Headmistress of the school, Vivian Akpene Dordor, and others.

She was supported by the Chief of the Defence Staff, Vice-Admiral Seth Amoama, to cut the tape.


According to Dr Okoe Boye, the project which began last year with support from some partners, was to honour his mother as well as promote a conducive teaching and learning environment for the teachers and pupils in the school.

He said it also formed part of some projects he was undertaking to promote quality education in the Ledzokuku municipality and the country at large. 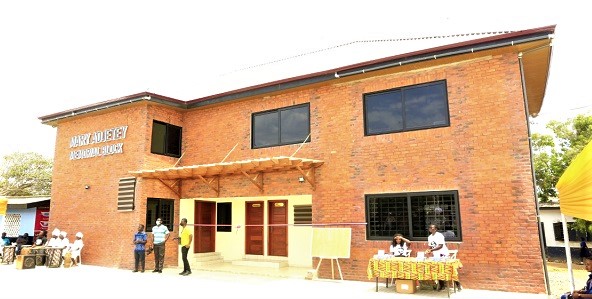 Describing the project as a way of giving back to his alma mater, Dr Okoe Boye, who completed the school in 1997, said children must not be denied access to quality education.

Dubbed the “Hope Project,” the immediate past Member of Parliament for Ledzokuku (Teshie), urged management of the school to put measures in place to eliminate all forms of hindrances that prevented children from accessing education.

The Chief of the Defence Staff, Vice-Admiral Amoama, commended Dr Okoe Boye for bringing relief to the teachers.

He impressed upon other former pupils of the school to emulate the benefactor’s gesture.

Also present at the ceremony were the Commandant of the Military Academy and Training Schools, Major-General Charles Awity; the Deputy Commandant of the Ghana Armed Forces Command and Staff College, Brig. Gen. W. A. Seidu, and other senior military officers.