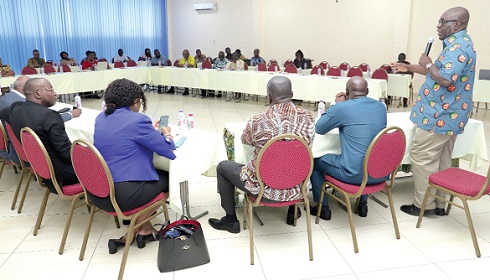 The Secretary-General of the Trades Union Congress (TUC), Dr Anthony Yaw Baah, has called on the government to inform the citizenry on the direction the country was heading in the prevailing challenging times to restore hope, especially to employers and employees.

He said concealing information and not opening up on questions such as "what is happening and what is going to happen”, would have dire consequences for the country going forward.

Dr Baah, who made the call at a bipartite meeting between employers, business associations and the TUC, also said that the rate at which the cedi was depreciating against foreign currencies, coupled with the rising cost of living, were creating unbearable hardships for the people, including workers and employers.

The Secretary-General described the current economic situation as worse than COVID-19, adding that predictions into the future had become even more difficult as "all these have come to overwhelm all of us, including the President".


"On May Day, the dollar was GH¢7, today it is GH¢15. Minimum wage was $1.6, today its value is less than that. And this translates into people's lives and their standard of living”.

"Just imagine the condition of a pensioner who earns about GH¢300 a month and yet spends 50 per cent of his/her income on drugs," he said.

Dr Baah, however, said providing information as it was done with "Fellow Ghanaians" by the President during the COVID-19 period would offer some hope to the people.

According to the Secretary-General, there had been numerous calls for the unions to embark on strike actions or demonstrations, but "how will that solve inflation," he asked.

He said although the unions were going to call for salary increment to improve the living standard of members, Dr Baah added that "even if the government doubles our salaries, the current conditions would swallow everything up. It is time to save the situation".

He, therefore, called on all to support the government in this difficult period, adding "we must be part of the solutions".

Some employers shared their experiences about how they were coping with the challenges.

An employer in the hospitality industry who had about 120 people working under her said she had to relieve almost 100 workers of their jobs to keep her business running.

According to the Chief Executive Officer (CEO) of the Ghana Employers Association, Alex Frimpong, businesses were really in difficult times, adding “this is the time we need to put on our patriotic gears and empathise with the system”.

"We have done this several times, we should not allow it to be said that as practitioners when the economy was facing challenges we were not able to provide solutions to support,” he said.

On the way forward, Mr Frimpong said the government must, as a matter of urgency, streamline the operations of forex bureaus to manage the forex, including supporting the production of local goods to reduce imports.

Others also claimed that some people were hoarding foreign currencies in the system, thus causing the artificial shortage.