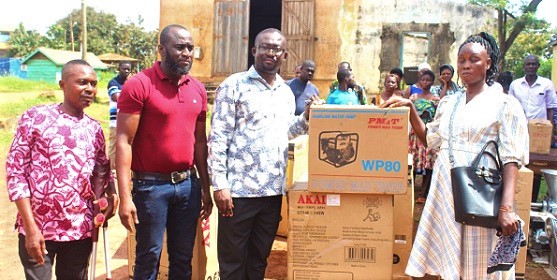 The District Chief Executive (DCE) for Wenchi in the Bono Region, Alexander Obuor Damoah, has advised Persons with Disabilities (PWDs) who receive support from the district assemblies not to sell items given to them.

He asked them to rather use such items to generate incomes to improve their living standards and added that the government was committed to stopping the practice of disabled persons begging for living by roadsides across the country.

That, Mr Damoah, said was being done through the presentation of start-up tools and capital to enable PWDs to work and support themselves.

The DCE made the call when he presented start-up tools and equipment to more than 30 PWDs in the area on behalf of the assembly.

The presentation, which was funded from three per cent of the assembly’s share of the District Assemblies Common Fund (DACF), was to support the beneficiaries to start their own businesses and reduce poverty among them.


Presenting the items, Mr Damoah said the government was investing in the lives of the PWDs to make them relevant and productive in society.

He said this year alone, the assembly had presented working tools and equipment to more than 100 registered PWDs in the area to improve their living standards.

He explained that the items were presented according to what the beneficiaries requested and were assessed by the assembly’s Department of Social Welfare.

He advised the beneficiaries to use the items for the purposes for which they were presented.

In another development, the assembly presented 10 packets of roofing sheets at the cost of nearly GH¢10,000 to the Wenchi Government Maternity Home, for the re-roofing of the facility.

The facility serves part of Wenchi and other communities such as Kejetia, Kramu, Banda line and Akrobi, among other farming communities.

Despite its services to several farming communities, the facility is in a deplorable state and lacks equipment and space.

According to the Midwife in charge of the facility, Ama Nyakoah Kwarteng, when it rained, water leaked from the roof which disrupted its operation.

Mrs Kwarteng said expectant mothers in the area had been avoiding the facility because of its deplorable nature, as well as the lack of logistics and the absence of laboratory services.

She said the poor state of the facility had drastically reduced daily attendance, particularly antenatal care, from 15 to about five per day.

She, therefore, thanked the assembly for the presentation, explaining that the roofing sheets had come at the time they were needed.

She expressed the hope that the re-roofing of the facility would help improve the provision of services to patients and attract more patients to patronise the facility.

Mrs Kwarteng appealed to the assembly to include the challenges of the facility in its 2023 budget to enable it to be renovated and expanded to improve service delivery.

Mr Damoah gave an assurance that the assembly would support the facility with the needed materials to enable it to serve the people in its catchment area.