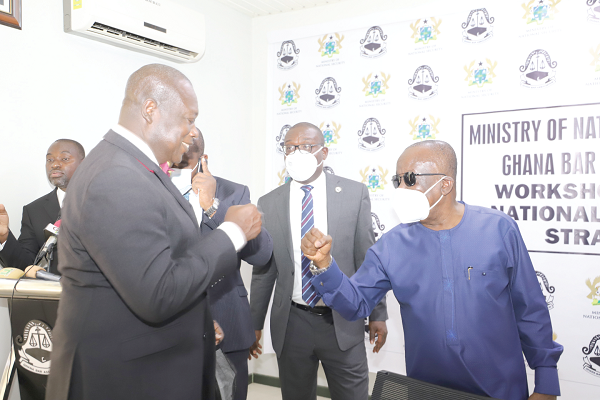 The Minister of National Security, Mr Albert Kan-Dapaah, has said the need for a strong national security system should not be an excuse for the violation of the rights and freedoms of the people.

He, however, said due to the nature of the work of the National Security, it was bound to have clashes with issues regarding rights and freedoms, noting that when such issues occurred, there was the need to resolve them in a manner that took into consideration the conditions and circumstances that the National Security worked.

“We need a strong National Security posture to ensure peace, security and stability in the country.

In our present democratic dispensation, National Security practices should not be allowed to ride over the fundamental human rights of people; but there are bound to be clashes,” he said.

Mr Kan-Dapaah was speaking at a workshop to sensitise members of the Ghana Bar Association (GBA) to the new National Security Strategy (NSS) in Accra yesterday.

The minister said Ghana faced a myriad of security challenges, both internally and externally, which required robust responses and support from all sectors, including lawyers.

For instance, he said, chieftaincy disputes, armed robbery, clashes between farmers and herders, terrorist activities outside the country, threats of secession by certain groups and unemployment were on top of the list of security challenges bedeviling the country.

He said such security challenges required well-equipped and well-motivated security agencies, but, unfortunately, over the years, some people had been of the belief that expenditure on security was not necessary.

“Forget about which government is in power; sufficient investments have not been made for the security and the intelligence agencies.

We have come to believe that expenditure in the security sector is wasted expenditure.

People ask: ‘Why spend money on guns and weapons when we need medicines and other essentials?’

But people have no idea the kind of security threats we deal with on a daily basis,” he said.

Mr Kan-Dapaah mentioned injustice as another serious security challenge, adding that without justice, people would be forced to take the law into their own hands, a situation which could have dire consequences on the security of the country.

“The importance of justice in safeguarding national security and national cohesion cannot be underestimated.

It was for no reason that our forebears settled on ‘Freedom and Justice’ as the country’s motto, for they knew, right from the onset, that the effective delivery of justice was one of the most important factors required for the sustenance of a nation throughout the ages,” he said.

He called for closer collaboration between the Judiciary and lawyers to improve justice delivery in the country in order to promote security.

“The security of a state and its people cannot be assured when injustice prevails.

Disregard for the ethics, standards and principles of the legal profession by members of the Bar is one of the surest ways for injustice to abound,” he said.

The new NSS was launched by President Nana Addo Dankwa Akufo-Addo in June this year.

The Ministry of National Security is currently on a sensitisation drive to educate key stakeholders, institutions and groups on the strategy.

The vision of the strategy is to maintain Ghana as a law-abiding, tolerant, socially cohesive, peace-loving, people-centred, secure and prosperous constitutional democracy.

It consolidates all the policy initiatives on national security into one integrated and comprehensive national security policy framework, with the ultimate goal to mobilise and coordinate the efforts of all sectors of society to deal with security threats.

Mr Kan-Dapaah urged lawyers to read the new strategy to fully appreciate the work of the National Security architecture in the country.

The President of the GBA, Mr Yaw Acheampong Boafo, described security as the bedrock of any constitutional and democratic system.

He lauded the government for coming up with the new NSS to help address current and foreseeable security challenges.

“It is our hope that the government will make available the necessary resources to equip our intelligence and security agencies to be able to bring to fruition the policies in the strategy document,” he said.