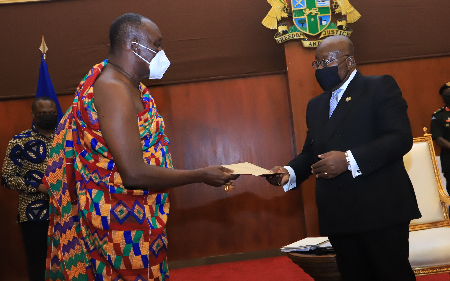 • President Akufo-Addo receiving a report from Nana Otuo Siriboe II, Chairman of the Council of State, during a meeting at the Jubilee House. Picture - SAMUEL TEI ADANO Follow @Graphicgh

Members of the Council of State last Friday presented their findings on a petition for the removal of the Chief Justice, Justice Kwesi Anin Yeboah, to President Nana Addo Dankwa Akufo-Addo at the Jubilee House in Accra.

The report was sealed and its contents were not made public. It is believed to have contained findings of whether a prima facie case has been established against the Chief Justice or not.

The Alliance for Social Equity and Public Accountability (ASEPA) had petitioned the President for the removal of the Chief Justice for allegedly collecting a bribe of $5 million.

The Chief Justice, Justice Anin Yeboah, has since denied the allegation and called on the Criminal Investigations Department (CID) of the Ghana Police Service to investigate the matter.

President Akufo-Addo explained the constitutional provisions with respect to the impeachment of a Chief Justice and said Justice Anin Yeboah was not only a judge of the superior court but also the Chief Justice.

He mentioned a Supreme Court case that addressed the lacuna in the law and the constitution which demanded that the same requirement that a prima facie case should be established before the impeachment proceedings could go forward for judges of the superior court and said the same should be done, otherwise it would not be fair to the Chief Justice.

The President said “that is the reason why we are going through this process of determining the prima facie case and as I said when it comes to constitutional interpretations, the findings that the Supreme Court makes are ones that are binding on all actors of the Ghanaian state, from the President through all other personalities of the state including the ordinary citizen of Ghana.

“That is decision; what is binding on me, binding on you and binding on the whole country and that is the basis for the process that we are going through now.

“I know that in your midst are formidable jurists so the necessary guidance that the rest of you lay men in the Council of State had, including the Archbishop and the others, had been well given,” President Akufo-Addo added.

The Chairman of the Council, Nana Otuo Siriboe II, presented the findings on behalf of the council in response to a letter that it received from the Presidency dated July 26, 2021.

He said in line with the demands of the constitution, as enshrined in Article 146/ 123, and in line with the decisions of the Supreme Court, the council was obliged to determine whether a prima facie case had been made and that determination would precede the process of impeachment.

“Mr. President, the Council of State has made its findings and we are here to present it to you so that we can determine whether or not a prima facie case has been made to warrant the start of an impeachment process for the removal of the Chief Justice of the Republic of Ghana,” he said.

President Akufo-Addo said he was grateful to the council for the intervention they had made and gave an assurance that he would obviously have a close look because his understanding was that Adjei Twum and another versus the Attorney General, which was the case law that had circled the understanding of article 146, required that he should consult the council to make the determination of whether or not the petition that had been sent to him had raised some prima facie case warranting the establishment of a committee as a preliminary step.

“I understand that the process of the impeachment of Chief Justices are meant to be in-camera proceedings so that the contents of the consultations between the two of us, your side in the letter and mine, will for the time being remain confidential until we are in the position to announce the results to the world,” President Akufo-Addo explained.