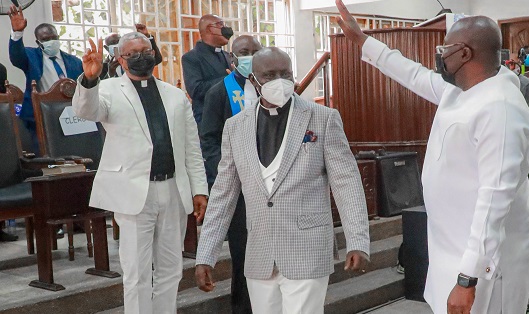 The Vice-President, Dr. Mahamudu Bawumia, has urged the leadership of all religious bodies to use the pulpit to propagate the message of peace and unity and to stress the need to maintain the oneness and peace the nation continues to enjoy in spite of its challenges.

He said Christians owed it a duty to uplift the sense of responsibility in the country as well as help fight pockets of corruption and impunity.

“Sincere Christians can do this by strengthening democracy and speaking out. May we continue to live in peace and unity as one people with a common destiny,” the Vice-President emphasised, saying, “certainly, we have no other nation but Ghana, so protect it.”

Addressing the congregation of the Adabraka Official Town Presbyterian Church of Ghana to herald the 30th anniversary celebration of Rev. Kwadwo Owusu Sarpong, the District Pastor of the church as minister of the gospel, Dr. Bawumia said God had blessed the country, the reason people continued to live in peace with one another albeit different religions but with a common destiny.

Born on August 22, 1955, Rev. Kwadwo Owusu Sarpong began his basic education in Goaso in the then Brong Ahafo Region.

He managed to write his Ordinary and Advanced Level certificate examinations as a private student at age 30 while working at the same time.

Rev. Sarpong in 1988 enrolled at the Trinity Theological College in Accra where he obtained a Diploma in Theology.

He was commissioned into the Presbyterian Church of Ghana in June 1991 and was ordained at the Osu branch of the church.

He has since studied various courses at the Kwame Nkrumah University of Science and Technology (KNUST), the University of Cape Coast (UCC) and the Ghana Institute of Management and Public Administration.

Dr. Bawumia, who eulogised Rev. Sarpong for his stewardship within the three decades, said: “Your profile speaks to the fact that you will continue to be a blessing to your family, to the Presbyterian Church of Ghana, to Ghana and to the world”.

“The nation needs independent voices like yours and so be assured that you are on the side of God and that he will keep and watch over you,” the Vice-President stated and said: “As you serve mother Ghana and the Church, commit yourself to the tenets of the church and the constitution of Ghana.”

Likening Rev. Sarpong to the apostles of old, Dr. Bawumia said, the church and society needed wise men such as Rev. Sarpong and implored him to let his voice be heard in national discourse.

While commending the Presbyterian Church of Ghana for its immense contributions to national development over the years, Dr. Bawumia encouraged the church and the entire christian community and indeed other faith-based organisations to continue partnering the government in its developmental efforts.

He gave an that the government shall continue to provide the enabling environment for such fruitful partnership to materialise.

Vice-President Bawumia said the Presbyterian Church of Ghana had partnered succeeding governments to move the development agenda of the country forward and that the government no doubt recognised the immense contribution of the church towards the growth of the nation, particularly, in the provision of basic, secondary, tertiary education, health care agriculture services and other social interventions across the length and breadth of the country.

COVID-19 and the economy

Touching on the devastation of the COVID-19 pandemic and its impact on world economies, Dr. Bawumia expressed delight that economic activity was picking up in the country.

He said the economy of the country was bouncing back and said the government projected a five per cent growth by the end of this year.

That growth, he indicated, was going to be considered one of the fastest in the world this year.

He pointed out that loss of livelihoods, rising unemployment and its attendant social problems were challenging governments of many countries to work hard to put their economies on the right path and steer lives back to normalcy.

Making reference to the book of Matthew, the Vice-President said: “God had been good to Ghana by showing the people favour which they are enjoying even in the midst of the pandemic.”

He, therefore, encouraged Ghanaians to continue to remain positive and resolute.

Dr. Bawumia also used the occasion to appeal to the congregation and all Ghanaians to voluntarily contribute to the building of the national cathedral which, he said, would not be for anybody but for the country and to the glory of God.

Speaking on the theme: “Celebrating the favour of the Lord,” Rev. Sarpong, who shared his life story from a humble beginning, said he went through a lot of adversity growing up but he never relented.

He was particularly grateful to one Mrs. Akosua Serwa Asare of the Sunyani Technical Institute (SUTECH) whom he said encouraged him and ensured he wrote the Ordinary Level at age 30 to make progress in education.

Rev. Sarpong was also thankful to God for remaining a dependable strength, saying he and his wife Mrs. Mavis Owusu Sarpong, had been sick but God ensured their recovery for them to be alive to celebrate his anniversary.

The Presbyterian minister appealed to the government to establish gynaecology departments at all health establishments across the country for the aged.