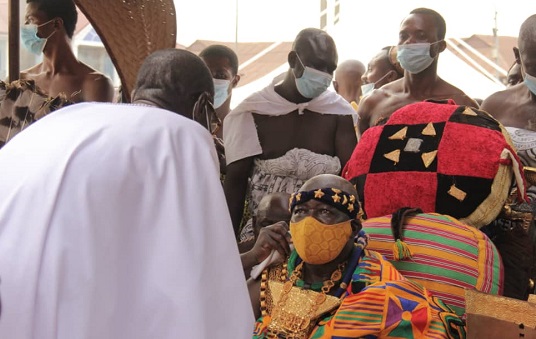 COA Research and Manufacturing Company Limited, COA RMCL, producers of COA Mixture, formerly known COA FS, has presented a cheque for GH₵600,000.00 to the Asantehene, Otumfuo Osei Tutu II, to support the reconstruction of the Manhyia Palace Museum and other developmental initiatives.

The museum is being reconstructed to meet modern development and in tandem with current digitalisation globally.

The Founder and CEO of COA mixture, Prof. Samuel Ato Duncan who also doubles as the President-General of the Centre of Awareness Global Peace Mission (COAGPM) also conferred an award on the Asantehene for his onerous contribution to peacebuilding in Ghana.

The Ashanti king has on several occasions mediated in very complex conflict situations including the Dagbon conflict.

Prof Duncan presented the award, which comprised a citation, a plague and a golden necklace to Otumfuo at last Sunday's Akwasidaekese celebrations at Manhyia Palace in Kumasi.

"It is expected that we also in our own small way contribute towards the development of the region that accepts our product," he said.

He said COA RMCL has provided sponsorship for all the activities of the COAGPM over the years.

He is hopeful that independent researchers will come out and partner the COA RMCL to conduct further research into the efficacy of COA Mixture.

In recent times, our observational studies have given us every indication that COA Mixture, when given the needed attention can turn around the health of many.

Prof. Duncan called for broader research collaboration both locally and internationally to establish the full potential of COA Mixture.

The COAGPM was founded by Professor Duncan in the year 2000 with the aim of adopting and implementing practical strategies to address the challenges to Peace globally.

COA Mixture is a medicine for general wellbeing. It is taken to support treatment of any sickness, disease or infection.

It is registered by the Food and Drugs Authority as a pure organic medicine which bioenergises, rejuvenate and harmonises the immunological cells.