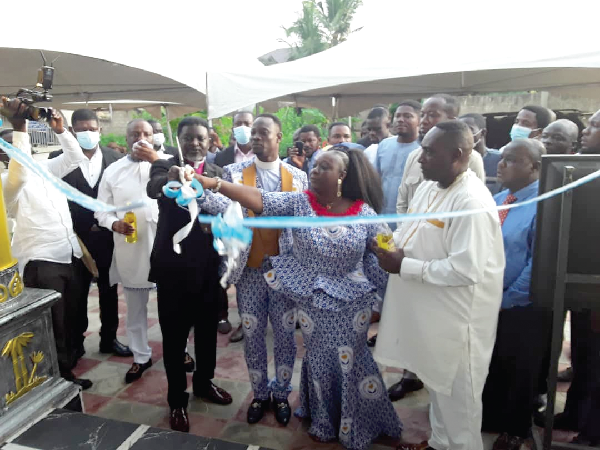 His Eminence, Most Rev. Dr Charles Agyinasare (2nd from left), Presiding Bishop of the Perez Chapel International, being assisted by Rev. Mrs Seyram Hodzi, the wife of the General Overseer of Destiny Carriers Ministry, to cut the tape to inaugurate the facility. Follow @Graphicgh

The Destiny Carriers Ministry has marked its 10th anniversary celebrations with the dedication of a 500-seater church auditorium at Ablekuma, a surburb of Accra.

This was after week-long activities to herald the grand celebrations which saw chuch members clad in their 10th anniversary attires.

The dedication ceremony was performed by the Presiding Bishop of the Perez Chapel International, His Eminence, Most Rev. Dr Charles Agyinasare.

In a sermon on the title “Dream Yet Another Dream”, he told the church members that they did not have to be number one to make an impact wherever they found themselves.

He cited the story of Joseph in the Bible who was not number one but yet was able to make an impact in Egypt and beyond.

Most Rev. Dr Agyinasare said that meant that they did not have to be general overseers to make impact or start their own church to make impact.

He said there were some of them God had called to be number two, three, four, five etc. and that they only had to be faithful because at the end of the day God was not going to reward them for being number one but for fulfilling what He had asked them to do.

He commended the church, founded by Prophet Hope Kwamla Nunekpeku Hodzi, on the occasion of its 10th milestone.