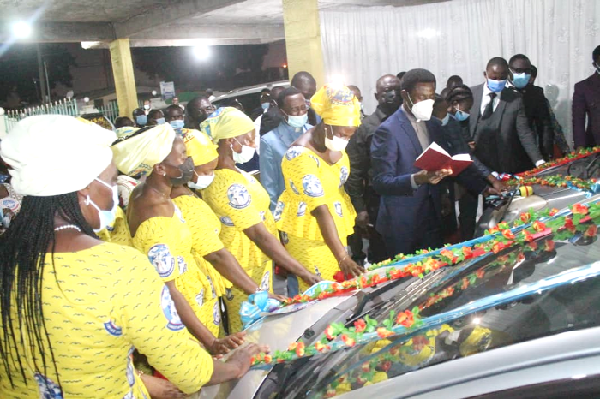 The Christ Apostolic Church (CAC) International has advised the youth of the church to venture into entrepreneurship to create their own employment.

“The youth must learn how to establish their own businesses rather than wait for someone to offer them employment, which does not exist now,” Mr Caleb Osei, an Elder of the church, said when the Accra West Territory of the CAC International presented two Toyota saloon cars to the Territorial Youth and the Good Women Ministries respectively at the Odorkor Central Church last Tuesday.

The cars were presented to the two ministries to run commercial activities to build their financial bases in the territory to finance their programmes.

Elder Osei said the youth must be guided as to how to create their own investments to be self-sustaining and be able to employ others in the church.

He said to realise this, the clergy must reorient the minds of the youth to venture into establishing their own businesses.

He stated that unemployment among the youth in the church was very high, and that it had been the cause of them not being able to attain a high status in society.

He also urged the church hierarchy to take the leading role to venture into social investments and focus on what they could do to generate the needed income for the church.

The Prophetic Director of the CAC, Apostle George Awuku Morklar, who inaugurated the cars, indicated that the business effort was historic in the ministries of the church, and expressed the hope that it would make the ministries function effectively.

He commended the Accra West Territorial Apostle, Apostle Joseph Sakyi, for his foresight towards providing logistics for the running of the various ministries in the territory, and called on other territories to emulate the example.

Apostle Morklar stated that the various ministries in the church lacked the needed logistics to perform their functions effectively, and indicated that what the Accra West Territory had done would support the ministries to perform optimally.

Apostle Sakyi stated that he realised that the financial base of the various ministries in the church was poor and that limited the efforts of the ministries.

He said the Good Women Ministry had projected to build a women’s clinic, while the Youth had planned to purchase a plot of land to build a church, and said those could materialise when the groups received the financial support.

He said it was based on the vision of the two groups that he decided to give them a push by buying them the two cars to strengthen their finances so that they could achieve their targets.