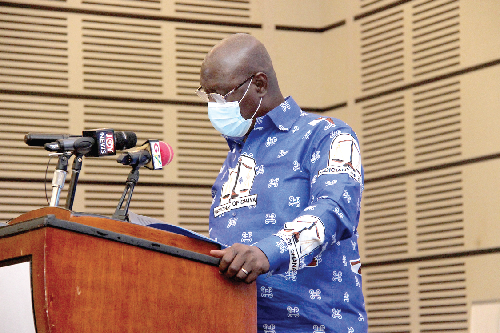 The Chief Justice, Mr Justice Kwasi Anin Yeboah, has called on the government to commit more resources to the Judiciary to facilitate effective justice delivery in the country.

He said the Judiciary, as an institution, was facing serious challenges in terms of personnel and infrastructure, leading to many areas, including urban centres, being denied access to justice.

“For example, from Accra Central, there is not a single court up to Amasaman. The same situation is true for Kumasi Central to Obuasi,” Mr Justice Yeboah added.

He was speaking at the 40th annual general meeting (AGM) of the Association of Magistrates and Judges of Ghana (AMJG) in Accra yesterday.

The AGM was on the theme: “The quandary of the judge in the digital world”.

The CJ, however, said: “Nevertheless, we still have to adjust to these constraints and hope the State will apply a bit more resources to provide court infrastructure to support justice delivery.”

He expressed appreciation to the government and members of Parliament for constructing new courts from the District Assemblies Common Fund, but said more still needed to be done.

The AGM was attended by judges and magistrates from across the country, as well as some retired judges.

Ratio of judges to population

The Chief Justice described the ratio of judges to the population of the country as “not the best”.

“In a population of over 30 million, we have less than 404 judges and magistrates administering justice in a litigious society like Ghana,” he said.

He said the limited number of judges, coupled with the infrastructure deficit, made it difficult for people, especially the poor, to have access to justice.

He, however, reminded judges of their duty to serve, adding: “We have to do our best within the limited logistic constraints to serve the justice needs of our compatriots.”

Justice Yeboah further challenged judges to adhere to the law and their code of conduct in all their endeavours.

He said the Judicial Council would not hesitate to apply the necessary sanctions and disciplinary action on judges who flouted the law and the ethics of the profession.

“Maintaining the prestige of judicial office is essential. Avoid all impropriety and the appearance of it in both your professional and personal conduct,” he said.

The President of the AMJG, Mr Justice Senyo Dzamefe, a Justice of the Court of Appeal, decried the constant delays in the payment of allowances to judges.

He said as of now, judges had not been paid any fuel and robing allowance in 2021, while book allowance had been outstanding since 2019.

“It is sad that judges in the country will have to fight every year for their legitimate allowances to be paid,” he said.

Mr Tuah-Yeboah said technology and digitisation, which the government was pursuing, had become an effective means through which justice was administered to the public.

He said his outfit was working to ensure constant improvement in the conditions of service of judges.

For his part, Mr Forson said judges played a critical role in the promotion of the rule of law and, therefore, there was the need to always safeguard and protect the independence of the Judiciary, as well as promote the welfare of judges.

He said justice delivery could only be effective if people who worked in the sector were adequately taken care of by the government, adding that the GBA would continue to support and defend the Judiciary at all times.