National Farmers Day to be held in Cape Coast December 3 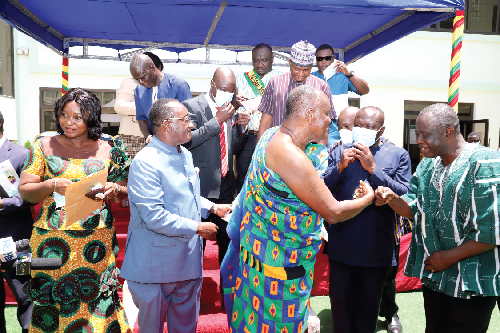 The government’s flagship agricultural programme, Planting for Food and Jobs (PFJ), will occupy centre stage at this year’s National Farmers Day to be held in Cape Coast, Central Region, on December 3.

The event will be on the theme: “ Planting for Food and Jobs: Consolidating food systems in Ghana”.

The Minister of Food and Agriculture, Dr Owusu Afriyie Akoto, announced this at the launch of the day in Accra yesterday.

Dr Akoto said the day, the 37th, was instituted in 1985 to support and appreciate farmers and fishers for their invaluable contribution to national development.

He said food security was crucial to the peace and stability of a society, adding that there was “incontrovertible evidence across the world that food insecurity is a major driver of conflicts”.

“This is why food production and access are important and must be prioritised at all times,” he said.

Dr Akoto gave an assurance that the country would not experience any food shortages next year.

According to him, his observation during a field trip to the Oti and the Volta regions this week to assess the situation was that Ghana’s food production outlook was positive.

The minister commended farmers and fishers for their hard work, saying they were the backbone of Ghana’s development.

“Our roads, schools, hospitals and scholarships for brilliant, needy students are a testament to the contribution our farmers have made and continue to make to national growth,” he added.

He, however, said the advent of the COVID-19 pandemic had compounded challenges of funding for the event.

“With the adverse impact on an already constrained national budget due to the pandemic, it has become necessary to rely on support outside the government to sustain the celebration in a befitting manner,” he said.

Dr Akoto said the national planning committee had been tasked to explore the use of digital technology in organising this year’s event to cut down cost and in line with the modernisation of the sector.

He expressed appreciation to partners for their support so far and further appealed to institutions, companies, groups and individuals to also contribute towards the successful hosting of the event.

The Chairman of the Council of State, Nana Otuo Siriboe II, mentioned some of the challenges in the agricultural sector to include climate change, pest and diseases and inadequate access to financing.

“Climate change, for example, has engendered unfavourable rainfall patterns that are challenging agricultural development,” he said.

Nana Siriboe, who is also the Paramount Chief of the Juaben Traditional Area in the Ashanti Region, said the bottlenecks in the sector needed innovative solutions.

For her part, the Central Regional Minister, Ms Justina Marigold Assan, expressed appreciation for the decision to organise the event in the region.

“This year’s celebration has come at a time when the region is actively participating in the PFJ programme which has benefited thousands of people in this area,” she said.