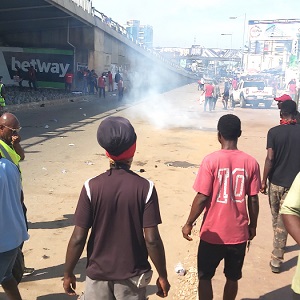 Some of the demonstrators looking at the tear gas fired by the police
30.5k Shares

Chaos, stone pelting and the firing of tear gas marred what had begun yesterday as a peaceful protest by Arise Ghana Movement, a pressure group, to drum home its displeasure at government policies and the high cost of living.

The police clashed with the protestors over a stalemate on the route they should use.

In the process, 12 policemen sustained varying degrees of injury, just like scores of the demonstrators.

It was a hectic day for the police, as they picked up some of the demonstrators for alleged misconduct and acts of vandalism.

It was the first day of the Ghana Arise demonstration.

Today, the protesters plan to converge on the El-Wak Stadium for the second leg of the protest and march to the Ministry of Finance and Parliament to present petitions.

While the protestors insisted on using the Ring Road Central (Circle towards Police Headquarters) to picket at the Jubilee House, the police said the demonstrators should march to the Black Star Square through the Kwame Nkrumah Avenue, where a team of policemen were lying in wait to coordinate the demonstration.

The protestors headed towards the Ring Road Central, while the police stood their ground and insisted that the protestors use the court-approved route, the Kwame Nkrumah Avenue to the Farisco Traffic Light to the Trades Union Congress office on the Boundary Road to the Black Star Square.

That was rejected by the protestors, who insisted that they had to picket at the Jubilee House and present a petition to the Presidency.

“We won’t compromise; we are going to the Jubilee House,” some of the protestors shouted.

They tried to make their way through to their destination, but that was resisted by a riot control police team fully equipped with glass shields, tear gas, pepper spray and rubber bullets which they used to control the crowd.

A statement signed by the Director of Public Affairs of the Ghana Police Service, Chief Superintendent Grace Ansah-Akrofi, said in the process, 12 policemen sustained varying degrees of injury, while some of the demonstrators were also picked up by the police. 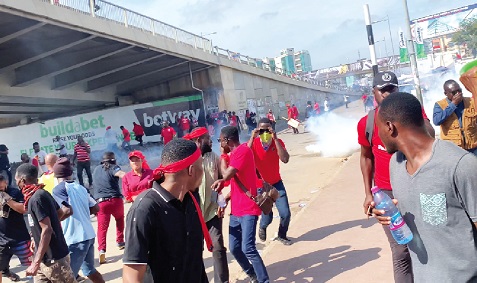 It said the police had no option but to use tear gas to restore law and order. 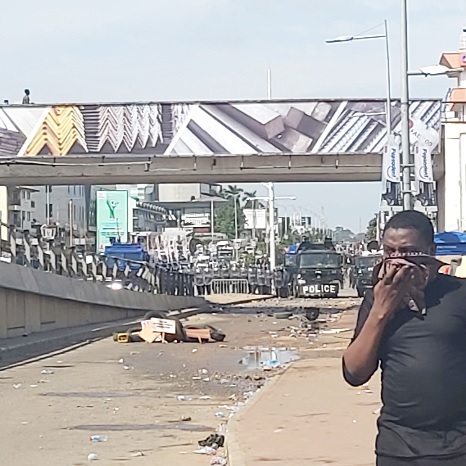 “Contrary to a court order, the organisers insisted on using routes leading to the Jubilee House. All attempts to persuade them to comply with the court approved routes did not yield the expected results,” the statement said.

Clad in predominantly red and black shirts and chanting patriotic songs, the protestors, led by some notable political figures, some from the opposition National Democratic Congress (NDC), carried placards that showed their displeasure with the performance of the ruling New Patriotic Party (NPP) government.

Other leaders were broadcaster, Kwabena Bobie Ansah; musician Rex Omar; the Deputy National Youth Organiser of the NDC, Edem Agbana, and the Executive Director of the Alliance for Social Equity and Public Accountability (ASEPA), Mensah Thompson.

Others were “Ghana Police, students are harmless”; “Go and help Bawumia arrest the dollar”; “Enough is Enough”, and “One Fuel, more than 14 taxes, We need Relief”.

A protester told the Daily Graphic that all he wanted was to make his voice heard with regard to the hardship in the country.

“I did not come here to fight anyone. All I want is a change in the country because things are hard now and we are suffering,” he lamented.

Another protester, who only identified himself as Alex, said he would not relent, no matter what the police did, and was determined to protest.

“There is nothing they can do to us that will make us go home. We will demonstrate till change comes into the country, and that is why I am here,” he explained.

Addressing the crowd, one of the lead conveners of the demonstration, Bobie Ansah, called for calm and asked that the protest remained peaceful.

He said in spite of the unfortunate incident, they would not relent in their quest to demonstrate and voice their opinions.

“We are not here to ask the President to stand down or leave office. We are just here to tell him and his administration to fix the country because the economy is too hard,” he said.

For his part, the Communication Officer of the NDC, Sammy Gyamfi, called for calm and urged the crowd to exercise restraint.

Mr Gyamfi also reiterated the commitment to continue the demonstration.

“We are not here to fight anyone. We are not armed, we don’t have guns. We are law-abiding citizens and we are here to exercise our rights,” he added.

At a news conference later, the leaders of Arise Ghana took turns to condemn the action of the police, describing it as unprovoked and unnecessary.

They were unanimous that the protesters did not incite the violent clashes that ensued.
Messrs Gyamfi, Omar and Mornah said the clash only took place because the Ghana Police Service was acting and negotiating in bad faith.

“Our hands and conscience are clean and we are not afraid because we believe in what we are doing,” they said.

The leadership, therefore, urged their followers to remain unfazed by the event and asked them to converge on the El Wak Stadium to continue the demonstration today.

In its ruling, the court presided over by Justice Comfort Kwasiwor Tasiame, also ordered that the demonstration should begin from the Kwame Nkrumah Circle, through Farisco to the TUC and finally to the Black Star Square, after which a representative from the Office of the President might receive the group’s petition if it had one.

The ruling came after the Ghana Police Service had filed an application to injunct the demonstration, which was originally intended to begin at 3 p.m., breaking at 10 p.m. before resuming in the morning of the next day.

The police maintained that the security situation in the sub-region was not conducive to such a demonstration.

However, after the High Court’s ruling, the organisers, in a press statement, said their lawyers had filed an appeal against the ruling that demanded that the demonstrators followed specific routes and a time schedule proposed by the police.

The statement, which was signed by the Communications Secretary of Arise Ghana, Ishaq Awudu, said the movement had filed an application for stay of execution of the court order.