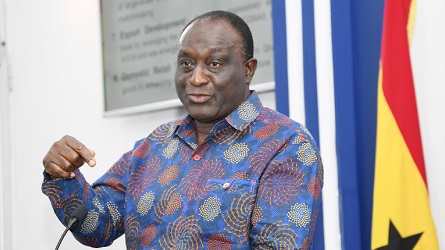 The retooling and repair work at the Komenda Sugar Factory (KSF) are 98 per cent complete.

The Minister of Trade and Industry, Alan Kyerematen, who disclosed this to Parliament yesterday, said a production test run would be conducted by the end of next month.

The minister was responding to a question on the floor of Parliament put to him by the Member of Parliament (MP) for Bole-Bamboi, Yusif Sulemana, on the state of the factory.

Mr Kyerematen said other works had either been completed or were at the final stages of completion.

He named the works to include the installation of a new pipeline to and from the plant to the molasses tank, and refractories. There is also lagging work in the boiler furnace and chimneys, which is fully completed.

Another was the completion of the vacuum and water testing facility at the boiler house, which had started working, with steam pressure testing ongoing for the turbine to generate three megawatts (MW) of electricity, the minister added.

Mr Kyerematen named the rest as the completion of raw sugar refining, enhancing it from between eight and 10 tonnes per hour to between 16 and 20 tonnes per hour, while equipment and machinery at the Mill House, the boiling house and the boiler and powerhouse sections had all been overhauled and repaired and components replaced, where necessary.

The Trade and Industry Minister said the electrical installation works, with all the motors and boilers, had been maintained and repaired, while the construction of a new warehouse for storing raw sugar jumbo bags of between one tonne and 5,000 tonnes was ongoing.

Mr Kyerematen said the turbine for electricity production had been overhauled and was being tested while sandblasting to remove rust and prevent further corrosion of equipment to maintain the integrity of all metal surfaces at the factory had been completed.

"Mr Speaker, with respect to civil works, the whole factory building and the warehouse have been re-roofed to stop leakages and corrosion, while the raw material warehouse, as well as the fencing of the factory, is currently under construction," he said.

Mr Kyerematen further said four acres of nursery land had been prepared for cultivation to support sugarcane development in the catchment area.

He said there were plans to expand the land to 500 acres after the commencement of operations.

In addition to the above, the minister said, the board of the company was finalising negotiations with traditional authorities to secure about 20,000 acres of land required for plantation development at the Sekyere Obuasi and Sekyere Hemang areas in the Central Region.

On the current high prices of cement on the market, Mr Kyerematen attributed them to the significant increase in the price of clinker, an imported product and main raw material for producing cement.

In addition to that, he said, the cost of freight had seen a very significant increase globally.

That, he explained, was largely occasioned by the disruption in the global supply chain, initially caused by the COVID-19 pandemic and subsequently the Russia-Ukraine war.

Furthermore, he said, the depreciation of the local currency against the US dollar and the increase in the prices of petroleum products had also contributed to the high cost of production of cement.

"These factors account for the increase in the prices of cement on the local market," he said.

The minister, however, indicated that the Economic Management Team, together with the Cabinet, was considering means to mitigate the factors influencing the high cost of cement in the country.