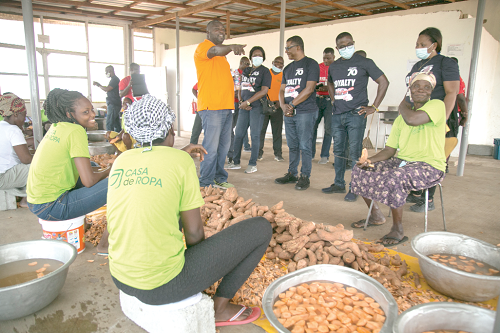 Mr Ebenezer Obeng-Baffoe, CEO of Casa De Ropa, introducing some of his workers to the Graphic team Follow @Graphicgh

Casa De Ropa, an agribusiness firm, has begun expanding its footprints across the country after spending five years to stabilise its operations.

Under the One district One factory flagship project, the company is currently expanding its out-grower programme across the country in the effort to increase the production of potato to feed its processing factory in the Central Region.

Meanwhile, it is also exploring the opening of retail outlets and restaurants on a number of university campuses in the country.

The Chief Executive Officer (CEO) of the company, Mr Ebenezer Obeng-Baffoe, who briefed a group of brand editors and management staff of the Graphic Communications Group Limited (GCGL) on the factory premises last Thursday, said Casa De Ropa had plans to open restaurants and sales outlets at the University of Education, Winneba (UEW), the University of Cape Coast (UCC) and the University of Professional Studies in Accra (UPSA).

He said the company was also putting the needed structures in place to open more restaurants and food outlets in other universities and places nationwide.

Mr Obeng-Baffoe said the company was currently procuring logistics and equipment to strengthen its product distribution channels across the country.

He said Casa De Ropa had not been keen on profits over the last three years because it was at the developmental stage but was concentrating on solidifying the brand and improving the lives of host communities and employees, many of whom were women.

He said the ongoing expansion work at the company would result in an increase in staff strength from the current 154 employees to 1,004 in two years’ time.

The delegation from the Graphic Communications Group Limited was on a familiarisation visit to the company’s factory and farmhouse located at Gomoa Bewadze in the Gomoa West District in the Central Region to acquaint itself with its operations.

The visit was a follow-up to one by a two-man delegation of the company, which comprised the CEO, Mr Obeng-Baffoe, and the Executive Director, Mr Anthony Dawson-Amoah, to the GCGL head office in August this year.

The two, who are co-founders of the company, held discussions with the Managing Director of the GCGL, Mr Ato Afful, and the other management staff on ways the two companies could collaborate.

Mr Obeng-Baffoe said the company produced and processed the ‘Apuomuden’ variety of sweet potato into bread, chips, pastries and pizza, among others.

He said the management of the company was convinced that when it began full-scale operations, the numbers of the unemployed in the Gomoa West District and throughout the country in general would reduce.

Members of the delegation from the GCGL commended the company for the good work it was doing.

For his part, Mr Asmah said he was impressed with what the company was doing with the raw material it had.