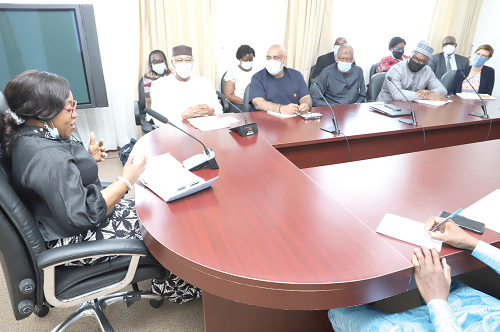 The mission, led by the Special Representative of the UN Secretary General for West Africa and the Sahel, Dr Mohammed Ibn Chambas, is in the country to learn at first hand, the political, technical, legal, security and other viewpoints and perspectives of stakeholders on developments ahead of the December 7 general election.

Dr Chambas explained that the mission was in the country to reinvigorate the strong support of the international community for a peaceful, transparent and credible elections.

The mission is also expected to explore options that support further dialogue among stakeholders with a view to promoting consensus on critical issues so as to ensure credible and peaceful elections.

Welcoming the delegation, Ms Botchwey acknowledged that elections were key in deepening multiparty democracy and accountability in governance.

She said Ghana took her commitment to democracy, good governance, respect for human rights and the rule of law seriously as they underpinned her political dispensation.

The Foreign Affairs Minister commended the UN, the AU and ECOWAS for their outstanding work in ensuring that elections in West Africa were conducted peacefully and in a free and fair manner.  She also extolled the three bodies for their ongoing efforts to calm tensions in Guinea and Cote d’Ivoire.

Ms Botchwey was also appreciative of the opportunity granted to the political actors in the country to express their views on preparations being made for the presidential and parliamentary elections.

She assured the delegation of the government’s commitment to work closely with all stakeholders to ensure that the elections in December were conducted in a peaceful, free and fair atmosphere.

She said measures had been put in place by the government, the Electoral Commission and the national election security architecture, headed by the Inspector General of Police, to boost public confidence in the electoral process.

Ms Botchwey expressed the hope that stakeholders would put the interest of the country above all other considerations with the view to maintaining Ghana’s enviable image as a beacon of democracy in the sub-region.

She said it was important that the general public was unified before, during and after the elections to enable the winning party to get on with work to develop the nation.

She said she looked forward to the mission sharing its findings with the government after it had interacted with all the actors in the electoral process.