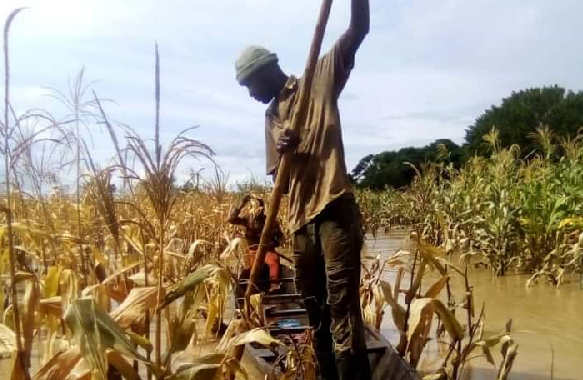 There are poor harvest prospects in communities downstream the White and Black Volta following Burkina Faso’s imminent opening of the spill gates of the Bagre and Kompienga dams on Friday.

Farmers in the communities are yet to harvest their produce, and the possibility of another destruction of farms looms.

SONABEL, the agency that manages the Bagre and Kompienga dams in Burkina Faso, has announced that the annual spillage of the dams would take place from Friday, August 27 to Monday, August 30, this year.

In a notice to the National Disaster Management Organisation (NADMO) and its partners, SONABEL said it had decided to begin opening the valves of the dams in the coming days due to the rapid rate of rise in the water levels.

It, therefore, urged residents of communities downstream the White and Black Volta to move to higher grounds for safety.

Within the White Volta enclave at the weekend, residents appeared to brace themselves for the annual ritual of flooding even as NADMO intensified measures to save lives and properties.

A resident of the West Mamprusi Municipality, Mr. Amadu Osman, said he had been informed about the imminent spillage of the dams but lamented that his 15-acre maize farm had not matured yet.

“If the floods come these days, it will be a disaster for me because all my crops are not matured yet; what my family will survive on will be a challenge, so I am appealing to the government and various supporting agencies to rush to our aid should the floods occur,” he said.

Another farmer, Mr. Salifu Awudu, observed that this year’s flood would cause more havoc because many people had not recovered from last year’s disaster and also farm crops were not matured yet.

Meanwhile, NADMO has begun sensitising residents living in flood prone areas along the White Volta to what to do to save lives.

As of the weekend, however, residents along the lake were yet to adhere to the advise to move to higher grounds.

The North East Regional Director of NADMO, Mr. Alhassan John Kweku, told the Daily Graphic that “our officers are on the ground sensitising the residents to stay safe during the flood to avoid casualties”.

He indicated that a team would also be deployed from Accra to join the regional team in the coming days to commence preparatory works ahead of the spillage.

Last week, NADMO launched the ECOWAS Flood Relief Assistance in Tamale to provide support to flood victims ahead of the floods.

The ECOWAS Flood Relief Assistance is a humanitarian intervention by the regional body to support flood victims within the member countries.

The five regions of the north would benefit from food aid and non-food items.

Last year, six persons lost their lives, with about 78,371 persons displaced in the North East and Northern regions by the floods, which was occasioned by the spillage of the Bagre Dam and torrential rains.

About 31,447 acres of farmlands were also swept away by the flood, with food crops such as maize, rice, millet and sorghum destroyed.