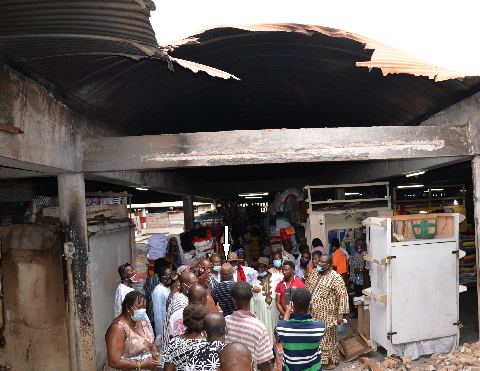 The Chief of Asere Kotopon in the Ga Mashie Traditional Area, Nii Asere Boi VII, has urged the managers of the Kaneshie Market Complex to put in place enhanced fire safety measures to prevent a recurrence of fire outbreaks such as the one that happened a couple of weeks ago.

He has urged them to also increase the number of security men at the market such that they are able patrol the market all day and all night.

Nii Boi made the assertion when he visited the market in the company of his elders to commiserate with the traders who lost their wares in the fire.

“It is necessary that smoke detectors are fixed at vantage points in the market to prevent fire incidents from happening,” he said.

“It is shocking that the market should catch fire at such crucial time when the year was ending. My sympathy goes to the affected traders who lost property and it is my wish that they recoup whatever they have lost in the shortest possible time,” he added.

The Environment Manager at the Kaneshie Market Complex, Madam Paola Delle-Sogbe, said the affected traders have been placed in temporary shops and a committee had also been formed to help address their challenges.

She said some consultants had already been to the scene to observe the damage done to the building and a report was expected to be presented to the market’s insurers for the redevelopment process to begin soon.

Madam Delle-Sogbe said it was premature for anyone to ascertain the cause of the fire.

Meanwhile, she said, the Maintenance and Security Unit of the market was working to establish the source of the fire.

“We have enough systems to help us identify what led to the fire and we are also waiting for the fire service to come out with their report and after that we will compare the two to help us know what steps to take to keep the market safe.

She went on to commend Nii Boi for his advice and for making time to visit the market to commiserate with the victims.

A section of the Kaneshie Market in Accra was destroyed by fire during the wee hours of Sunday, December 20,2020.

The fire gutted six shops and destroyed property running into thousands of cedis.

The Ghana National Fire Service (GNFS) was on hand to douse the fire before it caused extensive damage. In the mean time, there are processes ongoing to determine the cause of the fire.