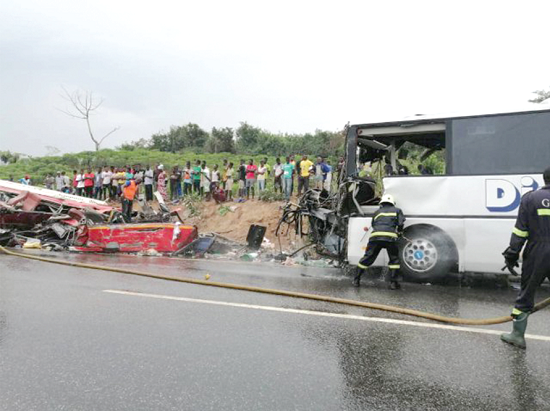 • A scene from the Dompoase accident
30.5k Shares

The Central Region began the year in review on a rather grim note when on January 14, 2020 34 people lost their lives in a highway accident at Dompoase on the Cape Coast-Takoradi highway.

As was recorded in other parts of the country, the region had its share of the good, the bad and the ugly in most facets of social and political life.

On a good note, the region had the two industries inaugurated, ostensibly to provide economic development as well as job opportunities for people in the region.

Also worthy of note was the major facelift of the Central Regional Coordinating Council residency and offices after years of it begging for attention.

If the accident at Dompoase was bad, the murder of the Member of Parliament for the Mfantseman Constituency, Mr Ekow Kwansah Hayford, was very ugly as it brought the region into the news for the wrong reasons.

The accident which occurred around midnight and involved two buses claimed the lives of 20 male adults, 11 female adults and three children, two females and a male.

On June 8, 2020 a Cape Coast Circuit Court finally sentenced the driver involved in the accident to one year imprisonment.

The accident caused the nation and bereaved families a lot of pain, with President Akufo-Addo tweeting to express his sympathies.

The region was not spared COVID cases.

On April 8, 2020, the Central Region recorded its first case of the novel Coronavirus, becoming the seventh in Ghana to have confirmed a positive case.

The Ghana Health Service’s regular updates indicated that the patient was identified and tested positive as a result of the ongoing enhanced contact tracing exercise.

Though the region had more than a thousand cases and some deaths, its situation has been manageable throughout the year.

Despite the gloomy start, the region had something to be proud of as it had two industries — the Casa de Ropa Potato Processing Factory and the Ekumfi Fruits and Juices Factory,  all projects supported under the One district One factory initiative of the government, inaugurated in August 2020.

The Ekumfi Fruits and Juices Factory is a wholly-owned Ghanaian company and has one of the most modern automated agro-processing plants in the country, with a total investment of $15 million.

In education, the Provost of the College of Health and Allied Sciences, Professor Johnson Nyarko Boampong, was appointed as the new Vice-Chancellor of the University of Cape Coast (UCC).

He took over from the immediate past Vice-Chancellor, Professor Joseph Ghartey Ampiah, whose term of office ended on July 31, 2020.

Mr Jeff Teye Emmanuel Onyame, who was the Director of Academic Affairs, also took office as the new Registrar of the university.

Again in the year under review, the Cape Coast Technical University set up a cyber security unit and a forensic laboratory to facilitate the training of cyber security professionals for the country's development and cyber space.

The project, which is under the National Initiative for Cyber Security Engineering Science and Technology and Education Programme (NICESTEP), an initiative by Cyber Ghana in collaboration with the Royal Academy of Engineering, United Kingdom and the Llyods Register Foundation also in the UK, is targeted at equipping interested youth in particular with the needed skills to trim down cyber crimes in Ghana and provide employment avenues for them.

The Paramount Chief of the Breman Asikuma Traditional Area, Odeefo Amoakwa Boadu VIII, was elected and sworn in as the new President of the Central Regional House of Chiefs.

He took over from Obrempong Nyanful Krampah XI, the Paramount Chief of Gomoa Ajumako Traditional Area, who assumed the leadership of the house in October 2016. 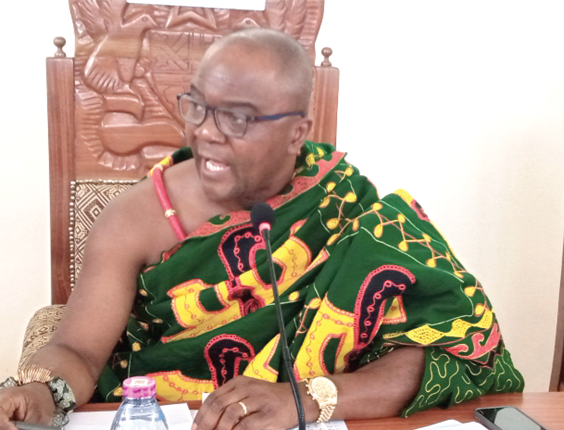 The National Democratic Congress (NDC) nominated its first female running mate of the presidential candidate, Prof. Naana Jane Opoku-Agyeman, who is from the Central Region.

The region had a fair share of political activities, with the presidential candidates and running mates of the two major political parties, the NPP and the NDC, criss-crossing to campaign for votes.

In the end the NDC won 13 of the 23 parliamentary seats in the region, leaving 10 for the NPP.

Mr Hayford was shot dead by unknown assailants while returning from a campaign tour on the Mankessim Abeadze Duadze road on October 9, 2020.

The region and the municipality welcomed many — both young and old and people across the political divide— to mourn with the family, as he was eventually laid to rest on November 28, 2020.

His wife, Mrs Ophelia Mensah Hayford, was nominated by the NPP as his replacement to contest the seat during the December General Election.

Mrs Mensah Hayford, who was a Police Officer, resigned from the service, accepted the nomination, contested and  won the Mfantseman Constituency seat in the December 7, 2020 parliamentary election.

On December 30, 2020 an Accra Circuit Court refused to grant bail to eight suspects who were arrested in connection with the murder of Mr Hayford.