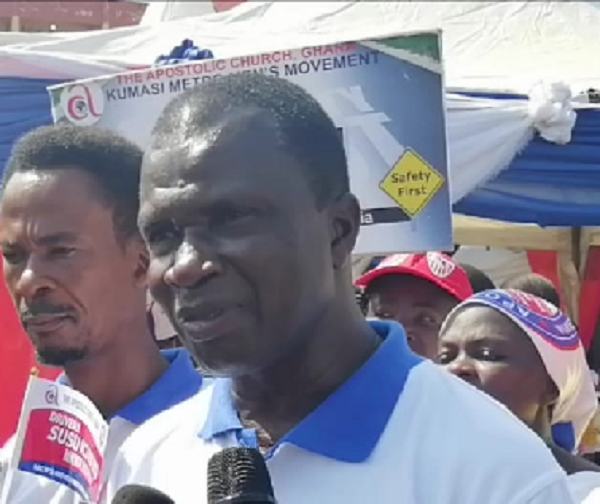 Elder Christian Obeng Boateng, Leader of the National Men’s Movement of the Apostolic Church of Ghana, addressing the media

The National Men’s Movement of the Apostolic Church of Ghana and the National Road Safety Authority (NRSA) have embarked on a road safety campaign to sensitise the public on safe road usage to reduce road crashes.

The exercise, which took place at the main lorry station in Obuasi, had an impressive public patronage.

At the event, the Leader of the National Men’s Movement of the Apostolic Church of Ghana, Elder Christian Obeng Boateng, said: "It is evidently clear that accidents are rampant in the nation, so we decided, as part of our programme, to campaign for road safety.

Most commercial drivers on our roads are men and, therefore, if we have to advise them then our expectations will be met and the carnage on our roads will be reduced," he said.

Deaths on the road

The spokesperson for the NRSA, Mrs Pearl Adusu Gyasi, said the number of road crashes this year alone was enough reason to embark on the exercise.

“Some 470 people have lost their lives between January and October this year due to road accidents.

The figure represents a 12 per cent rise in mortalities over the year,” she said.

"We are establishing a call centre where a short-code will be given out to the public to report all information on our roads," she added.

The campaign was launched on February 12 this year in Accra by the President of the Apostolic Church of Ghana, Dr Aaron Ami-Narh.