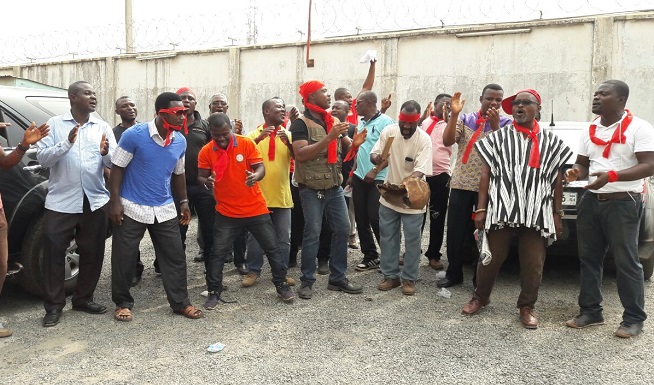 Some workers of APM Terminals, a container terminal operating firm at the Tema Port, yesterday embarked on a sit-down strike in solidarity with their colleagues who were interdicted for agitating for salary increases.

Clad in red armbands, the workers deserted the operational yard of the company and vowed not to return to work until their colleagues were reinstated.

The workers had initially proposed a 40 per cent increment in wages which was opposed by the company’s management, citing a freeze on wage increase by the mother company based in The Hague.

The management explained that due to a loss in the company’s revenue stream, it could only afford a 15 per cent increase which the workers rejected.

A representative of the workers, Mr Blankson Ametepee Hotor, who spoke to the Daily Graphic on the company’s premises, said the workers only engaged in a sit-down strike on December 28, 2016 to press home their demands for salary increment following a stall in negotiations.

He indicated that the negotiation between the workers and the management, which began in April 2016 and was to have taken effect in June last year, came to a halt following disagreements between the two parties, necessitating an intervention by the National Labour Commission (NLC).

“We were, however, taken aback when on Friday, December 30, 2016, 21 of our members were given interdiction letters because of the peaceful protest we held the day before,” Mr Hotor said.

The interdiction letters which were signed by the company’s Human Resource Manager, Mr Obed Owusu Asare, partly read: “Information available to management indicated that you were among a group of workers who embarked on an unlawful industrial action on Wednesday, December 28, 2016 contrary to the Labour Act.

“The said action has caused the company a huge sum of money, dented the company’s image and resulted in service failure to our customers, breaching the confidence they have in us.

“Based on the above information, management has decided to interdict you pending further investigations by the disciplinary committee (DC) for a period not more than three months,” the letters read.

Following yesterday’s protest, the Director of Port at the Ghana Ports and Harbours Authority (GPHA), Mr Jacob Kobla Adorkor, was prompted to call a meeting with the leadership of the workers and the management of APM Terminals to find an amicable solution to the problem.

Mr Owusu Asare, responding to the allegations of unlawful interdiction by the workers, told the Daily Graphic that the action was considered illegal, since negotiations were still underway.

According to him, the workers, on December 28, 2016, blocked the entrance of the company’s operational facility and locked out both management as well as customers, leaving many containers uncleared.

He indicated that the company’s management was surprised by the action of the workers considering that several meetings were held in connection with the negotiations which also had the general secretary of the Maritime and Dockworkers Union (MDU) in attendance.

Mr Owusu Asare, however, said the workers took management by surprise when they blocked the entrance of the terminal, locking both management and customers out of the facility.

“Customers who were in the yard to clear their goods were left stranded as the workers, some of whom kept the keys to machinery, were nowhere to be found, while others demonstrated and even took pictures of themselves during the demonstration which they mailed to our Chief Executive Officer (CEO) in charge of Middle East and Africa, as well as people who matter within our organisational set-up, informing them they were on strike,” Mr Owusu Asare added.

He said the company found the action of the group unfortunate, as according to him, the NLC, in its ruling on the issue dated October 31, 2016, restrained the workers from acts it described as unfair labour practices.