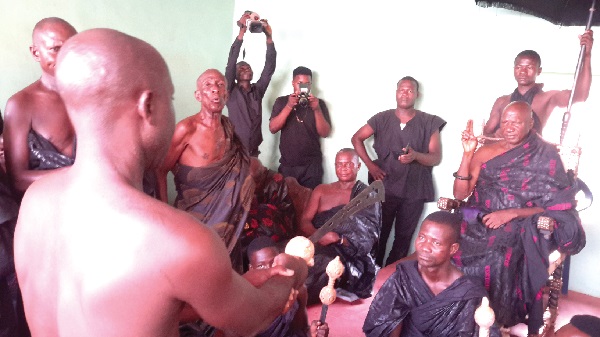 The chief of Apemanim, a town in the Atwima Kwanwoma District in the Ashanti Region, Nana Fobi Kropa III, has charged the newly enstooled Krontihene of the town to promote its development.

Nana Kropa was speaking after the new Krontihene of Apemanim, Nana Kwame Buabeng Banie, had sworn an oath of allegiance to him at a ceremony at Apemanim last Monday.

“The war confronting us today is about development and I urge you to mobilise the people to promote the development of this town,” he told the new Krontihene.

The oath swearing ceremony was characterised by drumming and dancing of adowa in a display of pure Ashanti tradition. Present was the queenmother of Apemanim, Nana Konsua Birago II.

In the Ashanti tradition, the Krontihene is a sub-chief, who leads the people to war and serves as the second-in-command to the chief.

But for about 20 years now, the Kronti Stool at Apemanim had been vacant following the abdication of the last occupant of the stool.

But after his enstoolment about 11 years ago, Nana Kropa found the need to fill that gap in order to enhance the fight against under-development at Apemanim.

In the past, he said, when the people went to war against their enemies, the Krontihene led the charges “but in our modern warfare, the fight is about development”.

He, therefore, advised the new Krontihene to brace himself up and mobilise the people for the promotion of development of Apemanim.

Nana Kropa, who is known in private life as Prof. Kwasi Ansu-Kyeremeh, a former Director of the School of Communication Studies, University of Ghana, asked his sub-chief to be committed and loyal to the cause of Apemanimman.

He also advised the new Krontihene to eschew arrogance, disrespect and other negative habits that could bring the good image of his stool into disrepute.

For his part, Nana Banie, 45, pledged his allegiance to Nana Kropa, saying he would attend to the call of Apemanimhene at all times.