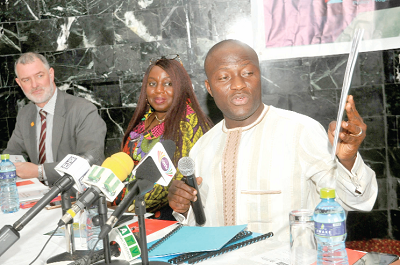 The Accra Metropolitan Assembly (AMA) has partnered the Bloomberg Philanthropies Initiative for Global Road Safety (BIGRS) to introduce some road interventions on the London Market Street at James Town.

The project, which will commence on April 6 and completed in May this year, is to help reduce pedestrian and road crashes in the area.

The BIGRS is a multi-partner initiative which aims to reduce road traffic fatalities and injuries in low-and middle-income countries through a comprehensive data-driven approach.

The interventions include the installation of 30 kilometres per hour speed limit sign, introduction of road line marking and rumble strips on the road to calm down traffic and ensure the safety of residents living in the area.

The Chief Executive of the Accra Metropolitan Assembly (AMA), Elizabeth Kwatsoe Sackey, embarked on an inspection tour on the stretch last Friday to assess the situation in the area.

It was observed during the tour that vehicular speed and traffic volumes in the area were high, while pedestrian-related activities were also high, thus, contributing to pedestrian and vehicular crashes in the area.

Additionally, there were no speed limit signs, speed ramps and road line markings on the entire 340-metre stretch.

The Road Design and Transportation Coordinator at the BIGRS, Samuel Boamah Danquah, said crash data collected indicated that the London Market Street was one of the streets with high crashes and fatalities within the Greater Accra Region.

That, he said, encouraged his organisation to do further assessment in the area to establish what was leading to the cause of the crashes.

He said some of the observations that were made included the fact that vehicular speed was high, while pedestrian-related activities were also high.

“So the combination of these creates a lot of pedestrian crashes so it was necessary to propose interventions that will help to ameliorate the situation in the area,” Mr Danquah said.

Under normal circumstances, he said speed limit was supposed to be 50km per hour and 30 km per hour in an urban space and residential areas respectively.

However, he said, speed profile analysis conducted by the organisation indicated that some drivers were driving at 60 km per hour within the stretch.

Aside from the safety interventions, Mr Danquah said the organisation would also introduce some perspective of artistic urban feature so that whoever plied that stretch could have a feel of their community made.

The MCE also reiterated that a lot of observations had been made in the area and the findings suggested that it was appropriate the road accessories were introduced on the stretch.

Already, Mrs Sackey said the assembly had engaged the residents living along the stretch to inform them about the project.

“We have urged them to be cautions when using the road and also guide the younger ones to cross the road,” she said.