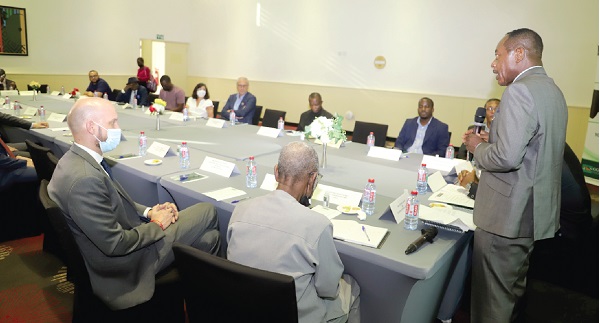 Stephen Antwi (right), President of the Ghana German Economic Association, addressing the participants in the meeting in Accra Follow @Graphicgh

Businesses with German links operating in the country have called on the government to empower the Ghana Ports and Harbours Authority (GPHA) to operate around-the-clock service at the Tema Port to improve efficiency.

They contended that a 24-hour service spanning all seven days was important for the businesses and industrial concerns.

The businesses, which are members of the Ghanaian-German Economic Association (GGEA), further asserted that such form of operation would also help to decongest the port and rid it of the bottlenecks that delayed transactions which invariably increased the cost of doing business.

The GGEA members made the call at a forum in Accra last Wednesday to interact with the Ministry of Trade and Industry, represented by a Deputy Minister, Herbert Krapa, and the German Ambassador to Ghana, Daniel Krull.

The discussions bordered on how to improve the ease of doing business in the country, especially at the Tema Port, and some tax-related issues among others.

Some business executives present at the forum were the Managing Director of DHL, Morgan Uloko; the CEO of KPMG Ghana, Kennedy Okosun; the Head of Tax, KPMG, Kofi Frimpong-Kore; the Head of Advisory, KPMG, Andrew Akoto, and the CEO of Electro Recycling, Nana Yaw Konadu.

Others were the Senior Partner, Akoto-Bamfo & Co, Eugene Akoto-Bamfo, the Marketing Manager of KNAUF Ghana, Hans Kisseih, and the MD of Bank of Africa, Kobby Andah, among others.

Mr Krapa, who commended the GGEA for organising the forum, said improving the ease of doing business formed part of the government's 10-point industrialisation agenda which remains the pillar to add value to the raw materials produced in the country.

He said the government was of the conviction that if there was value added to the country's primary exports it could have a positive effect on the economy.

He assured the German Ambassador that Germany remained a great partner to Ghana and despite the ongoing Ukraine and Russia war, which has interrupted supply chains globally, German businesses could be confident in investing in Ghana because of its political stability and friendly investment climate.

He noted that the government was putting in place measures to further the ease of doing business and the concerns of the Association would be addressed.

Mr Krapa told the Daily Graphic in an interview after the forum that the reversal on benchmark values, which was a concern at the forum, was an approach to help the economy to grow by discouraging imports and inspiring local production.

"The government has, through the economic management team, withdrawn the benchmark values but consultations are still ongoing to ensure a smooth implementation," he said.

He said the situation called for more consultation because it was a matter between trade associations and industry or local manufacturers.

On the issue of the GPHA operating a 24/7 service, he said the ministry would engage the Minister of Transport to help address the issue.

" That is a good suggestion that we will put before the Ministry of Transport because issues like that involve collaboration between different agencies," he said.

The President of the GGEA, Stephen Antwi, opined in an interview with the Daily Graphic after the forum that the ports must work around the clock like it is done in some developed countries to help the economy recover from its current state.

"Why can't you go on a Sunday morning to clear your goods. It makes the system too rigid," he said.

He said the government must as a matter of urgency declare the implementation date of the reversal of the benchmark values if it wanted to implement it to help businesses make future plans.