Accommodation for soldiers at Michel Camp 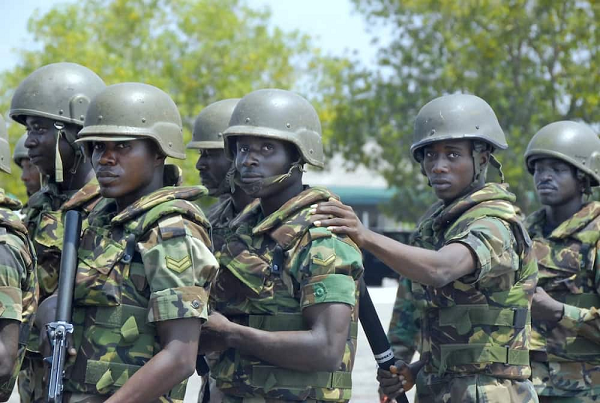 A 100-Bed capacity dormitory block at the First Battalion of Infantry (1BN) at Michel Camp in the Greater Accra Region to augment the accommodation needs of the troops has been inaugurated.

The block that has a sleeping area, locker rooms and a standard sanitary facility was constructed at the cost of GH¢ 700,000.00 by Structures and Logistics, a local construction firm, with funding from a philanthropist, Mr David Paa Kwesi Yarquah.

Maj. Gen. Oppong Peprah said the accommodation facility had come in at a time when the number of officers and men were increasing at the 1BN, one of the strategic units of the Army, especially with its numerous task and responsibilities they carried out.

These tasks and responsibilities, he said, often required the deployment of troops at short notices while in other cases, troops were required to be on standby to respond to occurrences and emergencies; hence, the need to augment the accommodation needs of the army to enable them to respond to such calls.

He said 1BN had since time immemorial done well to accommodate troops from other units of the GAF, including personnel of the Ghana Navy and that had led to increased pressure on the already inadequate accommodation facilities.

He stressed the commitment of the Military High Command, among others, to fix key challenges facing the various units, including accommodation, which had been identified as a major concern. “With the increased strength of the GAF, more efforts will be put in to beef up the accommodation challenges, especially for young soldiers,” he said.

He urged occupants of the Block to exercise good maintenance culture.

Maj. Gen. Oppong-Peprah disclosed that under the Barracks Regeneration projects, construction works on 16-unit, two-bedroom semi-detached blocks, which would accommodate 32 families at Michel Camp, as well as eight units for personnel of the Base Ammunition Depot (BAD) of the GAF, were ongoing.

He said a four-storey flat to accommodate 16 families under construction was also progressing steadily.

He said these projects would be completed in the first half of next year and these facilities would help in easing the accommodation challenges faced by troops posted to 1BN.

The Commanding Officer of 1BN, Lieutenant Colonel (Lt. Col) Simeon Barifi Nyante, expressed appreciation to the Military High Command for the intervention, stressing that it was a solution to one of the major challenges the unit had been grappling with.