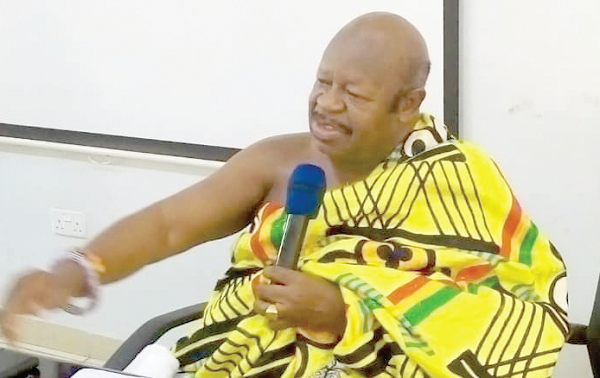 Nene Sakite, President of the Eastern Regional House of Chiefs, addressing MDCEs and heads of departments and agencies in Koforidua

The President of the Eastern Regional House of Chiefs, Nene Sakite II, has stated that the House is unable to settle many chieftaincy disputes in the region due to limited number of chiefs.

Nene Sakite, who is also the Konor (Paramount Chief) of Manya Krobo, said that together with limited resources accounted for many of such disputes not settled as at now.

Nene Sakite made this known at the Eastern Regional Coordinating Council (RCC) meeting at Koforidua last Tuesday attended by Municipal and District Chief Executives (MDCs), coordinating directors, heads of departments and agencies. It was to take stock of activities in the region and plan for the coming year.

According to Nene Sakite, fewer chiefs and limited resources made it impossible for Nananom to adjudicate chieftaincy disputes pending before the House on a timely basis.

"We have been making sacrifices by spending weeks to resolve chieftaincy disputes just because we do not have the numbers to do that expeditiously. We the chiefs are committed to do the job," Nene Sakite said.

He explained that out of the 11 paramount chiefs, only five were active but the House had been doing its best to resolve chieftaincy problems.

Nene Sakite said in that regard, Nananom would be at the Jubilee House to seek assistance from the President, Nana Addo Dankwa Akufo-Addo.

He said members of the House had not been sitting there unconcerned about matters brought forth for settlement.

According to him, some politicians such as assembly members and MDCEs involved themselves in chieftaincy issues just because they wanted to be made chiefs after retirement from public service.

Earlier, the Eastern Regional Minister, Mr Seth Kwame Acheampong, said the region had remained peaceful because the security heads charged with the duty of maintaining peace had lived up to expectation.

With regards to chieftaincy, the regional minister said such an institution in the region had been inundated with disputes thereby affecting the security situation in the areas concerned.

He, therefore, appealed to the appointing authorities of the various family gates or stools, as well as the Regional and National House of Chiefs to step up their responsibilities to address the countless chieftaincy issues in the country and the Eastern Region in particular.

On illegal mining, Mr Acheampong indicated that the Regional Security Council (REGSEC) would soon be coming out with a work plan and action to control and manage mining in the region.

He also said latest activities of sand wining in some parts of the region had also become a major security concern and warned those involved in such activities to put an end to it or face the full rigours of the law.