A  day in the life of kayayei: The struggles, misery of Bintu, Ramatu 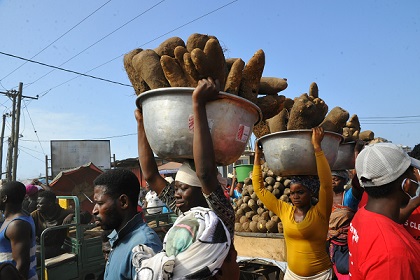 A native of Savelugu in the Northern Region, Bintu Mohammed, 38, has been in the head porter (kayayei) business for over two decades.

Ever since she escaped from forced marriage and got to Accra in 2001, it is this business that has put food on her table.

Now a mother of three, Bintu continues to break her back with heavier loads to fend for her children.

For some time now, the Daily Graphic has been observing activities of kayayei in Accra and finding out the conditions in which they live and what support systems are in place for them.

According to the President of the Kayayei Youth Association (KYA), Mohammed Osman, about 35,000 kayayei operate in five commercial cities in the country - Accra, Kumasi, Tamale, Techiman and Ho.

“This implies that there are many of these kayayei in other cities across the country,” Mr Osman said in an interview.

Their ages range from 10 to 40 and many of them have fled from forced marriages and poverty, and are seeking jobs and better living standards.

The girls and young women who should be in school or be building illustrious careers flood the city of Accra to hew wood and draw water for a livelihood.

There are also young females with babies strapped to their backs, who go through daily drudgery and receive peanuts in return.

From dawn to dusk, they scavenge markets and other business enclaves of Accra to cart heavy loads. If they are not in the Konkomba Yam Market at Agbogbloshie, they are at Tema Station; if they are not in the Central Business District (CBD) of Accra, they will be at the Kwame Nkrumah Circle or Kaneshie and Mallam Atta markets.

They break their necks and backs with loads that weigh them down.

Following Bintu for a while, it was obvious from the looks in her eyes that she had been fatigued by long hours of carting yams from one point to the other all day.

Carrying a large stainless steel head pan loaded with 22 big tubers of yam, Bintu Mohammed coiled a rag round her hand to form a pad.

She placed the pad on her head, took a deep breath and beckoned two of her counterparts to help her lift the heavy load onto her head. 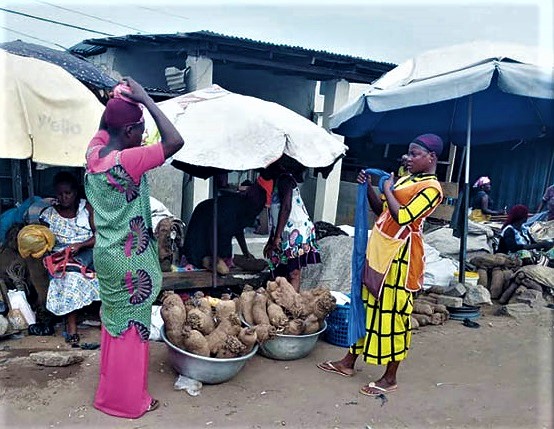 The three mustered the energy they could and lifted the overloaded pan onto her head.

She staggered initially, but quickly maintained her balance and headed for her destination, meandering her way through the heavily packed Konkomba Yam Market at Agbogbloshie in Accra.

It is the place thousands of people gather daily to win bread for their families. As usual, the place was bustling with commercial activities as traders in yam engaged in brisk business.

While some young men unloaded yams from KIA trucks, other players in the value chain carried out one activity or the other.

As Bintu bulldozed her way through the market, the Daily Graphic followed her to see how far she would go.

After stalking for 500 metres, she transferred the yams into a car and the driver handed her GH¢5.

As she retraced her footprints back to the yam market, the Daily Graphic engaged her in conversation.

“As I stand now, my knees and waist ache badly. I have to buy painkillers at the end of every day so that I can work the following day,” she said.

Unlike the good old days, Bintu said she could barely make GH¢30 a day because the Kayayei numbers had increased forcing them to accept very low fees for their services.

As the proceeds from the Kayayei business continue to dwindle, Bintu has to also grapple with accommodation challenges.

“I live in the Old Fadama slum. We were 10 in a room but four left, so we are now six. We all pay GH¢10 per week. It is difficult to pay this rent because things are bad,” she said.

Another head porter, Ramatu Mohammed, 17, a graduate of Nyankpala Islamic Junior High School in Tamale, said she did not continue her education to senior high school because her father could not provide for her.

“I arrived in Accra six months ago to engage in kayayei so that I can raise some money to buy a sewing machine and other stuff required for a passing-out ceremony,” she said.

Ramatu perches with seven others in a wooden structure along the Korle Lagoon at Old Fadama.

“We pay GH¢10 each week. Anytime you do not pay the rent, you are ejected, so you sleep outside,” she said.

In the case of Amina Yakubu, who also migrated from Tolon in the Northern Region to Accra this year, poverty has been her assailant.

“Things are hard for me at home. There is no work at home, so I had to come and find something here to do,” she said.

Alima Kande, who also migrated to Accra from Sang in the Mion District in the Northern Region, said her motive
for engaging in the kayayei trade was to save some money to enable her to serve her apprenticeship as a dressmaker.

The Old Fadama slum community at Agbogbloshie has become a safe haven for a greater percentage of the head porters. Aside from the bad sanitary conditions and sub-standard accommodation in this area, the kayayei sleep in those wooden structures in groups of up to 10 people or more and pool resources to pay rent every week.

For instance, Asibi and nine others who share a kiosk-sized wooden structure contribute GH¢7 each to pay their weekly rent of GH¢70.

For others who are not lucky to find any form of accommodation, they spend their nights in the open, and at market centres such as Tema Station, CMB and around the Abossey Okai Central mosque.

They are exposed to mosquitoes and the harsh weather conditions; and anytime it rains, they are at the mercy of the weather.

Apart from being exposed to health risks, they are also victims of rape.

The government announced plans to put up a hostel facility for head porters at Agbogbloshie in Accra to help address their accommodation challenge.

The Minister of Finance, Ken Ofori-Atta, who disclosed this when he presented the 2020 budget statement to Parliament on Wednesday, November 12, 2019, said the construction of the facility would begin in December, 2019.

“Mr Speaker I am happy to announce that preparations are now complete and the construction of the first 600-bed kayayei hostel will commence in Agbogbloshie next month to provide accommodation and skills training to these vulnerable young women,” he stated.

However, when the Daily Graphic visited the Old Fadama community last week to find out what had become of the kayayei hostel facility, it came to light that the project was yet to take off.

According to the President of the KYA, they have not had any firm assurance from the government on when the hostel will be constructed.

He therefore appealed to the government to honour the promise which he said would go a long way to better their living conditions.

The KYA and the Head Porters Association of Ghana are the two umbrella bodies that serve as the mouthpiece of kayayei in the country.

According Mr Osman, accommodation, health and social stigma remain the biggest scar kayayei battle with in their daily lives. 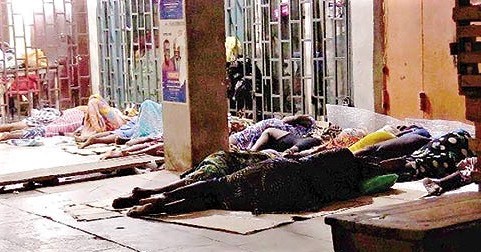 For instance, he said the lack of accommodation, which had forced the kayayei to sleep in the open, had brought about unwanted pregnancies, unsafe abortions and deaths.

“Some of them are married women. Maybe someone came and convinced her and slept with her, or she was raped. When such a person gets pregnant, they try to terminate it using concoctions because they cannot go to the hospitals and pay for safe abortions; so they die,” he said.

Under the project, the partners provided family planning services and connected kayayei with a broad range of social and health service providers.

They were provided with contraceptive options, including natural methods, so that they could decide the number and spacing of their children for themselves.

Mr Osman indicated that when the programme was introduced, it helped to eliminate deaths through unsafe abortions.

“After the end of the project, unsafe abortions and deaths among kayayei have started again. Last two weeks, one of the girls who had a baby passed away through unsafe abortion,” he said.

He added that the accommodation challenge had made kayayei low hanging fruits for bad men who slept with them.

In 2021, the KYA started issuing identity cards to the head porters and so far, 3,000 registered kayayei have been issued with the cards. 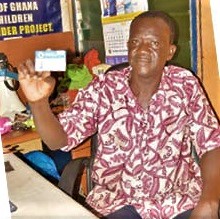 Mr Osman said the issuance of ID cards stopped because of financial challenges.

“The registration is very important because it will help us to identify all the underage kayayei so that we can create a project for them and take them out of the markets,” he said.

Touching on the way forward, Mr Osman said it was important for a concerted effort to be made to tackle the push factors for rural-urban migration, especially from the northern part of the country to Accra.

He called for the setting up of many skills training centres in the north to train many of the youth who migrate to Accra to do menial jobs.

Again, he underscored the need for the government to prioritise investment in the agricultural sector as that would help address the poverty factor that drove rural-urban migration.

“Poverty is endemic in the north and it is all because agriculture, which is the backbone of the people, has broken down due to inadequate investment in the sector. Investment in agriculture will revamp the local economy, ensure food security and create economic opportunities for residents of the area,” he said.

Mr Osman suggested that the government should have a pool of tractors for farmers to rent at cheaper rates to work on their farms.

“If you need a tractor to plough your land today, they will tell you that it is GH¢300 per acre. The tractors belong to private organisations or business people. How many farmers can get this money? That is the point,” he indicated.