Let NSMQ victory spur you on - Akufo-Addo to Prempeh students 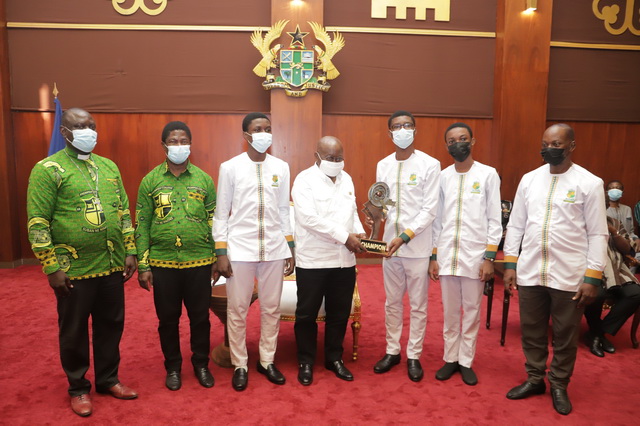 President Nana Addo Dankwa Akufo-Addo has commended Prempeh College for winning the 2021 National Science and Maths Quiz (NMSQ) competition and urged the students not rest on their laurels.

It should rather position them as great leaders of their fields of endeavour to make greater contribution to the development of Ghana. It might produce another President from the school aside from former President J. A. Kufuor, he said.

President Akufo-Addo made the call when he received a delegation of the 2021 NSMQ winners, Prempeh College led by former President Kufuor at the Jubilee House.

He urged the three students who contested on behalf of the College to bear in mind that they were the future of the country and therefore, should not rest on their laurels.

“This is just the first step that you are taking. Remember that there is a long road ahead of you. Apply the same resources, diligence, hard work and enterprise that had brought you this championship to your development and human beings,” he added.

President Akufo-Addo with winners of the Naional Science and Maths Quiz in 2021. Pix SAMUEL TEI ADANO

Standards
The President said these victories, including the world Robotics competition they annexed last year were all indications that the students were living up to the high standards set by their predecessors and they should be congratulated for that.

He said it was reassuring that the school concentrated on the all-round education of the students including languages, sports, science, mathematics and many others, and added that all these aspects of the educational architecture are the things the students have been following diligently.

He noted that while specialization was good, the country required well-rounded citizens with knowledge in several aspects of life so that the country could put all these aspects together and get a very rich cocktail for Ghana to develop.

Latin
President Akufo-Addo noted that in their times education started with Latin and Greek. He said even though the Mathematics was present, the humanities had a greater influence on them.

“But in your time, the modern knowledge is Mathematics and Science and I am very encouraged that we have a school like yours in our country which is demonstrating the ability and capacity in these areas. This is the best possible indication of the security of our future”, he added.

Old Boys
He was full of praise for the role the old students, the Parent Teacher Association (PTA) and other sponsors had been playing to help the school and urged people to take interest in their former schools and assist these schools to become stronger.

School Block
President Akufo-Addo assured the school that government would complete an 18-classroom block which was commenced during the era of President J. A. Kufuor.
“As I said in the beginning, he is my boss, I served him in two capacities and it’s befitting that I complete something he started,” the President stated.

Prime Time
He commended Prime Time, the organisers of the NSMQ for the dogged manner they had organised the programme over the years and said the Ministry of Education had a revenue line that would be used to support it.

Headmaster
The Headmaster of Prempeh College, Mr. Aaron Attuah Gyau noted that the school was not defined by NMSQ only but it was also a champion when it came to debates, robotics, proficiency in French “and in the field of sports our name echoes with resounding familiarity.”
He commended all those who have supported the school over the years including PTA, philanthropies, old students and the keen interest and support of President Akufo-Addo.

He said the first four-year term of President Akufo-Addo brought a lot of development into the school including furniture, renovation of master bungalows, asphalting of road networks, a new dormitory block and many others.