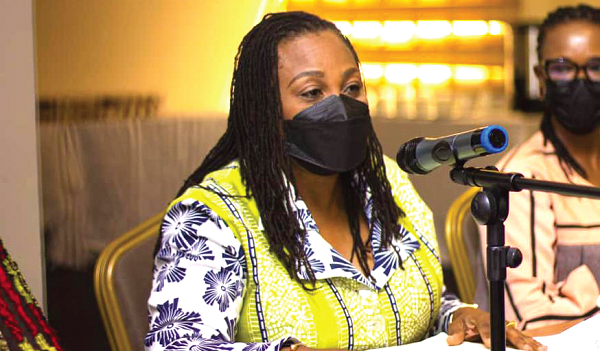 Ms Josephine Nkrumah, Chairperson of the NCCE, speaking at the event Follow @Graphicgh

Stakeholders in education have called for a collective support on the part of all Ghanaians to deal with the socio-economic and cultural practices that have affected the smooth implementation of the Ghana Education Service back to school campaign and re-entry policy.

That, they said, was to ensure that school dropouts and pregnant girls returned to school to continue their studies for the development of their lives and society.

The programme, dubbed: Eduwatch Re-entry Convening, was, among other things, to discuss the GES Re-entry Policy and device ways on how the participants could contribute towards its effective implementation.

The Chairperson of the NCCE, Ms Josephine Nkrumah, who set the tone for the discussions, noted that the re-entry policy was important for education and learning which society must not overlook.

“I mean if we are looking at redressing inequality in society, then this is one sure way we must be looking at critically. There is enough data that suggests that a lot of girls fall through the cracks of their educational journey due to pregnancy,” she emphasised.

That, she said, had a negative impact on the lives of such girls, their families, the children that they brought forth as well as society as a whole.

In a power point presentation, the Executive Director of Africa Education Watch, Mr Kofi Asare, noted that currently about 30 per cent of school dropouts among girls was caused by teenage pregnancy, and that while the Ghana Health Service (GHS) reported 109,865 teenage pregnancies in 2020 alone, over 500,000 teenage pregnancies occurred between 2016-2020.

“The GES reports that 70 per cent of pre-tertiary pregnancies occur at the junior high school (JHS) level with an average in-school pregnancy rate of 7,000 a year,” he explained, adding that the re-entry policy being operated by the Girls Education Unit of the GES, was aimed at adopting measures to prevent pregnancy among school girls and facilitate the re-entry of adolescent mothers to school after childbirth.

He mentioned the challenges with the implementation of the policy to be unsustainable funding, inadequate staffing, lack of economic support, misconception about teenage pregnancy and infrastructure deficits.

“The Sexual Reproductive Health (SRH) Education strategy should be reviewed to attain synergy between GES and GHS, Reproductive Health CSOs. Though the overarching message is abstinence, it is time for a national conversation on contraception and safe sex advocacy for teenagers, especially when Ghana keeps recording 100,000 teenage pregnancies annually, which is an indictment on the abstinence only strategy”.

The Education Specialist of UNICEF, Dr Madeez Adamu-Issah, said the re-entry policy was developed because of the number of girls who got pregnant in the past kept increasing, adding that last year, for instance, 8,500 girls got pregnant.

Any single girl that drops out of school because of pregnancy, he said, was a bad case for the country and “that is why we want to get every girl back to school”

“It is something that if we are able to get all the girls education officers working, all the guidance and counselling units in the district offices working, the headteachers and teachers understanding the issues and helping the girls to be assertive, some of these things would be addressed,” he said.

For her part, the Executive Director of PPAG, Ms Abena Adubea Amoah, indicated that although the re-entry policy was good, it was critical to empower young girls to take decisions that would enable them to remain in school.

She said it was important to provide girls with information and knowledge to prevent pregnancy rather than wait for them to get pregnant and then re-admit them in school.

The Programmes Manager at Star Ghana, Ms Eunice Agbenyadzi, said in most countries where re-entry policies had been introduced to persuade girls to go back to school, there had been little progress due to several factors including socio-culture and financial.