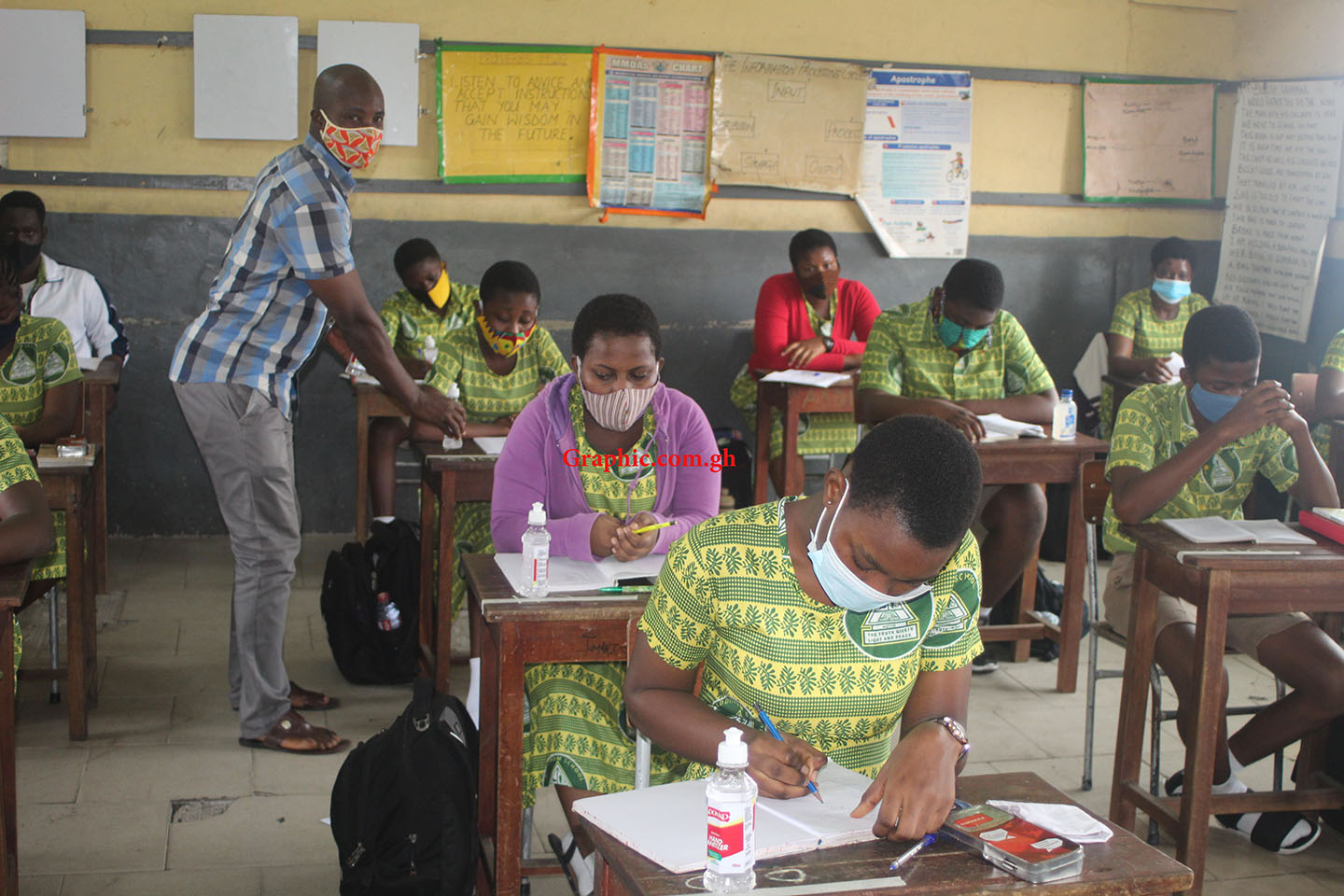 Some teachers and students told the Daily Graphic correspondents that adherence to the coronavirus disease (COVID-19) safety protocols remained a major priority for them at this time.

Although some of the students and teachers were yet to receive their nose masks and hand sanitiser from the state, they appeared prepared for the engagements ahead of them, bearing in mind the dangers associated with the disease.

They came from home with their nose masks and hand sanitiser ready to continue with academic work, while appealing to the government to fulfil its promise and provide the protective items.

Temperature checking points had also been set up at the entrance of the schools to check the status of students before they were made to enter the classrooms.

The heads of schools also confirmed that their facilities had been mapped with hospitals and clinics within their range to attend to students in case of any emergency.

Some of the teachers also appealed to the government to provide them with face shields instead of nose masks “so that when were are teaching, it will be audible”.

The Daily Graphic correspondents also observed that filled Veronica buckets, soap and tissue paper had been made available at vantage points for handwashing.

Others are the A.M.E. Zion School, the Amankwatia School at Asafo, Kumasi; Kabore JHS, Methodist JHS and the Anglican JHS, all in the Ho municipality; the Saint John's JHS, Adabase JHS and the Great Victory Academy, a private school in Bolgatanga, as well as St Monica's Girls JHS, Philip Quaque Boys JHS and the Mfantsipim Basic JHS in Cape Coast.

In the Tema metropolis, some students returned to school yesterday to disturbing scenes of traders turning their compounds into markets, while some drug addicts had turned the verandas into sleeping places.

The students had to spend the greater part of the day cleaning their classrooms and dusting the furniture, which had accumulated so much dirt over the period of closure.

The Tema Metropolitan Director of Education, Mrs Bernice Ofori, toured some of the schools yesterday and said the directorate had held discussions with the TMA and market leaders to ask their members to vacate the verandas in order not to interfere with school activities.

She said the directorate had also distributed PPE to all the 94 public and private schools with a population of 3,722 in the metropolis.

The Presiding Member of the TMA, Mr Joseph Korto, who visited the basic school, said efforts in the past to stop activities of junkies on the Akodwo School by the construction of a wall proved futile, as the drug addicts always scaled the wall.

In Accra, the team of reporters observed that by 10 a.m. most of the students were seated and were having lessons in many schools.

In Kumasi, the team observed that PPE were yet to arrive, but students arrived in school with their own nose masks. All other safety and hygiene materials were in place.

Classes had started as of 10:47 a.m. and the social distancing protocols were being strictly observed in the classrooms of Kabore JHS, Methodist JHS and the Anglican JHS, which were visited in the Ho municipality.

The Headmistress of the Methodist JHS, Ms Rejoice Kasu, said they had asked the students to come to school with their lunch packs so no one would leave the classroom until they closed at 1 p.m.

In Bolgatanga, some of the schools were yet to receive their protective gear.

The Regional Director of Education, Mr Augustine Ayirezang, said the region was expecting the government’s supplies to students and teachers.

Bishop Monroe AME Zion JHS, Wesley International School, Trinity Presby JHS and St Dominic Catholic JHS are some of the schools that were visited in Koforidua.

All students and tutors were seen in nose masks, and Veronica buckets were staged at vantage points to ensure handwashing. The numbers in the classrooms were significantly reduced to promote social distancing among students.

The schools had received the protective items the government promised.

The Headmistress of Bishop Monroe AME Zion JHS, Ms Comfort Baafi, advised the students to maintain discipline and hygiene in order not to contract the coronavirus.

Some of the heads said they expected classes to resume fully today. However, PPE were yet to reach some of the schools.

In Cape Coast, attendance was impressive as more than half of the candidates had arrived.

Attendance was also encouraging as more than half of the students were in school.

The Headmistress of the Nyamaa D/A JHS, Ms Rita Essien, told the Daily Graphic that parents provided nose masks for their children while the school also provided the hand washing items.