Dada Faustina Akosua Awude a mother for all 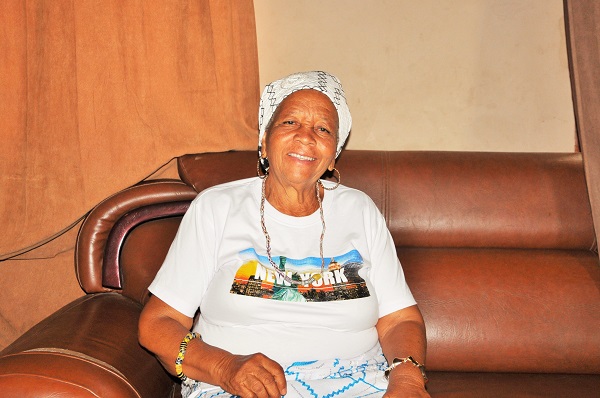 Faustina Akosua Awude is a 78-year-old woman who lives at Klefe-Achatime, near Ho in the Volta Region. She has 12 children and 25 grandchildren.

Some admire her for her flawless beauty and her outgoing nature; but many more adore her for the strong bond of love between her and the family.

The one-time fashion designer is very punctual with her appointments and she clearly demonstrated this with The Mirror on Tuesday.

The meeting was scheduled for 7:00 a.m., at her splendid retirement home at Klefe-Achatime, but Dada (as she prefers to be called) was ready well before the time. This prompted a neighbour to alert me on phone to hurry up.

In a chat with The Mirror, she narrated how she struggled to look after the children with proceeds from her sewing business in Accra and later became an agent for fishing net companies in South Korea and Japan, when her fashion business was no longer picking up.

“Then after I had turned 50, my husband, a Malian businessman, Seiko, who was very supportive in looking after the children died,” she revealed. 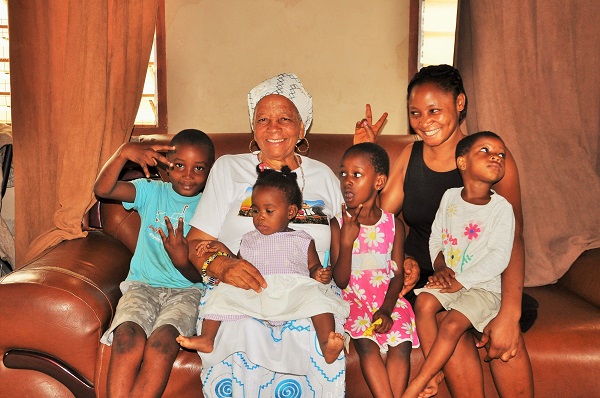 Dada Faustina with some of her grandchildren

Dada said, after her husband’s death, she worked extra hard to raise funds for the upkeep of the children.

Today, some are working as nurses in Europe and Ghana; some are teachers and some others are self-employed.

The strong attachment between Dada and some of her grandchildren who were initially peeping through the door during our conversation, was readily demonstrated when I was just about to take a photograph of her.
They entered the living room suddenly to scramble for space to pose with her on the sofa.

The septuagenarian beauty then introduced the oldest of her children, William, a farmer, 37; and the youngest, Mathilda, 27 a nurse, to me.

Unbeknown to many, Dada is not the biological mother of the children.
“I adopted them from my brothers and sisters and other family members who faced difficulties raising them,” she revealed.
Dada said she took up the responsibility to look after some of them when they were just three months in the womb.
The Mirror: But you are an accomplished mother by all standards.

Dada: Yes. It is the maternal role you play in a child’s life that makes you a mother.

Mirror: There is so much joy in your house as I can see now.

Dada: Where there is love, there is joy. I brought them up with love and also with discipline. I had my own way of disciplining them without necessarily resorting to the cane.
Sometimes, my voice alone was enough to correct anyone who was getting naughty.

The Mirror: What motivated you to get to such an astonishing height of motherhood?

Dada: It had all along been my dream to give hope to children. Anytime I heard some woman had thrown their child away soon after giving birth, I cried and said I wished the unfortunate child was thrown somewhere near my house so that I could rescue that child and raise him or her with love. So, the motivation is my love for children.
Mirror: Clearly, you have done so much for your children. What do you now expect them to do for you?

Dada Faustina and the writer

Dada: Hmmm... What I expect is their phone calls on my birthday and Mothers’ Day to hear their goodwill messages. I just want them to be in touch with me all the time, wherever they are. So, when they do not call early on my birthday or on Mothers’ Day, I get upset with them.

The Mirror: You have worked so hard to look after your children and you can now spend time relaxing at home.

Dada: My grandchildren are growing and I need to groom them also into responsible adults. So far, I have bought three plots for them and I will continue to do more for them.

At this juncture, I asked if she could visit me in Ho for dinner. Dada agreed heartily but Mathilda and the grandchildren all said in one voice while laughing: “Eiiii, we will miss her if she leaves the house oooo”.

In her leisure time, Dada who speaks Ewe, English, Twi and Wangara (a Malian Language) loves dancing to borborbor music.
The Mirror: Your house is so clean.

Dada: It has to be like that so that in the future my children and grandchildren will keep their homes clean.
The Mirror: What advice do you have for aspiring mothers?

Dada: The simple message is: It is the chemistry between you and your child that matters, not the biology.

The Mirror: Akpe (thank you)

Dada: My pleasure. I hope to see you again soon.